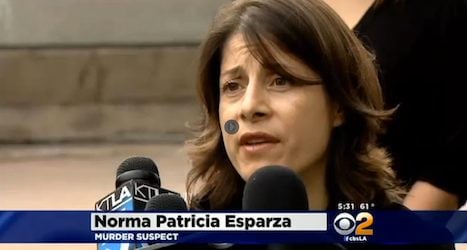 Norma Patricia Esparza, 39, an assistant professor of psychology at Webster University in Geneva, has been jailed in California on suspicion of “special circumstances murder”.

Prosecutors claim she set in motion the kidnapping and killing of Gonzalo Ramirez, who was murdered with a meat cleaver in 1995.

The professor, who has a four-year-old daughter and lives on the Swiss-French border, strongly denies the charges and claims Ramirez raped her when she was a student in California.

Friends and colleagues in Geneva are campaigning to free Esparza from jail in Orange County, California. They say she is a victim on trial for a crime she did not commit.

Cynthia Uccello, a counsellor based in Geneva, is rallying support through Project HOPE Geneva, a charity dedicated to helping victims of sexual abuse.

“We wholeheartedly believe in Patricia’s innocence,” she told The Local.

“Patricia’s students and colleagues at Webster were overwhelmingly shocked at the charges and supportive of her fight against this injustice.”

Project HOPE Geneva is appealing to the Orange County district attorney to drop the charges.

“There has been an outpouring of support for Patricia,” said Uccello.

“Many letters have been sent to the district attorney’s office, reiterating her kindness, compassion and strength of character.”

The charity’s petition on Change.org, urging prosecutors to drop the charges, has received more than 5,700 signatures.

Project HOPE Geneva is also fundraising for the rising legal and travel costs, while providing emotional support for Esparza during the trial.

“Sexual violence is a deeply painful experience for the survivor and has long-reaching consequences on women’s physical and mental health,” said Uccello.

“Going through this gruelling process with the investigators in California, as well as having details of very painful past experiences out in the public space, would be incredibly difficult for anyone.”

Local campaigners, including staff and students at Webster, have sent letters, photographs, books and other tokens of their support directly to Esparza in jail.

“Every action, no matter how small, will bring her one step closer to freedom,” Uccello said.

At the age of 20, Mexican-born Esparza secured a scholarship to California’s Pomona College, where she was allegedly raped in her dorm room by Ramirez.

She didn’t report the assault to police at the time, later saying that she felt guilt and shame – feelings which were compounded by sexual abuse she had suffered in childhood.

Esparza did reportedly tell her then-boyfriend Gianni Anthony Van about the assault. Van and two others, Shannon Gries and Diane Tran, are alleged to have carried out the killing in revenge. They deny the charges.

Esparza later married Van, saying she did so out of fear. They were divorced in 2004, and Esparza secured a position at Webster in 2009. She is married to Jorge Mancillas, a neurobiologist who works in Geneva.

Police arrested Esparza in Boston in 2012 when she returned to the US for a conference. In November last year, she rejected a plea deal to reduce the charge from murder to voluntary manslaughter.

Esparza told reporters: “The principle of what they’re asking me is to plead guilty to something that they know I am not responsible for.”

Campaigners from Project HOPE Geneva were among the supporters who attended Esparza’s pre-trial hearing last Friday, wearing purple ribbons to show their solidarity.

Uccello said that Esparza was “surprised, grateful and strengthened” by the support from Swiss campaigners.

“Patricia decided to go public with her story because she felt she had no choice, that the story being told by the prosecutor’s office was one-sided and incomplete,” she added.

“She couldn’t have known what the outcome of going public would be, and she thought that she would be alone in her struggle for the truth to be told. She did not expect that so many people would walk that journey with her.”

Uccello and other campaigners have expressed their concern about the message Esparza’s prosecution sends to other survivors of rape, a crime which remains vastly underreported.

“I hope that there’s a growing movement to bring awareness to the plight of those who suffer sexual violence,” said Uccello.

“But the reality is that there’s still a long way to go for victims to speak out and seek justice while getting the emotional support needed when coping with a traumatic event.”

“In the future Project HOPE Geneva plans to support other survivors of sexual violence who are trying to rebuild their lives in the aftermath of assaults,” she added.

Esparza’s next court appearance has been set for February 26th.