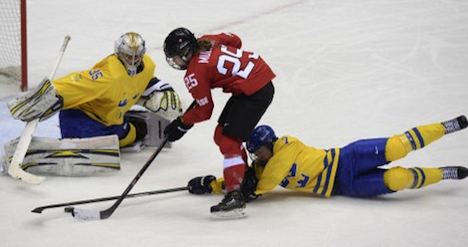 Müller, who is the third youngest hockey player to play in the Winter Olympics, capped the scoring for the Swiss with an empty net goal in the third period on Thursday at the Bolshoi Ice Dome in Sochi.

Sweden built a 2-0 lead at the end of the second but were outscored 4-1 in third by the Swiss.

Switzerland won a bronze medal in the 2012 world championship, but the Olympic bronze is their first ever for Swiss women's hockey.

The country's women's curling team, meantime, narrowly lost out on a bronze medal to Great Britain.

Team GB's all-Scottish foursome beat Switzerland 6-5 in a match that came down to the last stone.