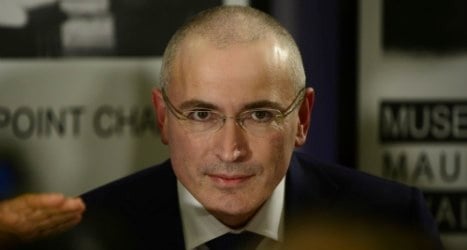 "I declare that I am ready to travel to any location in Ukraine at any time at the invitation of any responsible actor in order to help prevent bloodshed," Khodorkovsky said in a statement.

The 50-year-old, who currently lives at a Zurich hotel after he was pardoned and released from prison last December, said he believed "the presence of independent and internationally-known individuals in Ukraine at this time could help prevent the escalation of the conflict."

His comments came as the former Soviet state accused Russia of pouring more troops into Crimea — a strategic Black Sea peninsula with a majority ethnic Russian population — and as world leaders grappled with Europe's worst standoff since the Cold War.

Khodorkovsky, once Russia's richest man, was jailed in 2003 for fraud and tax evasion in what his supporters say was Russian President Vladimir Putin's revenge against him for financing the political opposition and openly criticizing the Russian leader.

"As a result of the incompetent actions of politicians, we find ourselves on the brink of being involved in a civil war in Ukraine," Khodorkovsky said.

He also warned of "many tragedies, including for millions of Russian-Ukrainian families, and extremely grave consequences for our nation's domestic situation and international standing."

"I have family and friends who are Ukrainians. Just as it is for others, for me this is a family affair," he said.