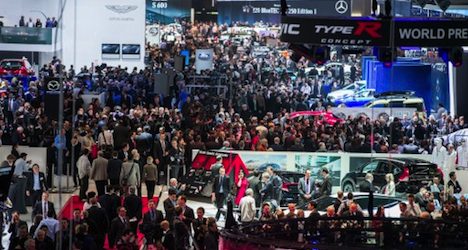 Small, punchy vehicles grabbed more of the spotlight than usual as one of the world's biggest and most diverse car shows opened its doors to journalists on Tuesday.

The show began on an optimistic note as the industry celebrated signs that the European car market was finally returning to growth, but carmakers said that many consumers were still being drawn to the lower end of the market by weak economic conditions.

The French carmakers, who are specialists in the compact city car segment, were eager to show off their new goods, with Renault unveiling a more compact third-generation version of its popular Twingo.

"This is a product that will conquer a more feminine and younger clientele," Renault commercial director Jerome Stoll told reporters Tuesday.

The new Twingo, which comes in a range of bright colours and has been reshaped with five doors and the engine in the boot, is produced alongside Mercedes's new Smart ForFour, which has yet to be presented.

The company hopes to repeat the success of the first generation of the Twingo, whose frog-like appearance, minimalist equipment and low price appealed to a younger crowd, with 2.5 million cruising out of showrooms since its launch in 1992.

The new Twingo faces off at the show against its compatriot Peugeot's new and niftier 107 city car, the 108, built along side the new Aygo from Toyota and the updated Citröen C1.

The new "triplets" all come in a range of bright colours and, like Fiat's ever-popular 500, can be personalized.

"The A 'segment of compact cars' is important because it's still a big part of the European market," explained Didier Leroy, CEO of Toyota Europe.

American carmaker Ford, which unveiled a third instalment of its hugely popular compact Focus — the world's best-selling model — said that compacts were the backbone of its European business.

"Most of our business in Europe is small vehicles, the Fiesta and of course the Focus," Barb Samaradzich said.

The compacts were not the only stars of the Geneva car show.

As always, they battled for attention with a range of exceptional luxury cars.

While the show will not feature last year's overwhelming display of extravagant machines priced over the million-dollar mark, there is still  plenty to excite luxury enthusiasts.

Ultra-trendy SUVs and crossovers also figured among the belles of the ball.

Porsche, once known only as a sport car maker, sped into the mid-size SUV range with its new Macan, hoping it will prove as popular as its big sister Cayenne, which accounts for more than half of the carmakers' sales.

It faces off against other newcomers, like Range Rover's new and sportier Evoque Autobiography.

Volkswagen's Golf-based T-Roc, a compact SUV concept, on show for the first time at Geneva, also falls into this category.

The car show opens its doors to the public on Thursday.