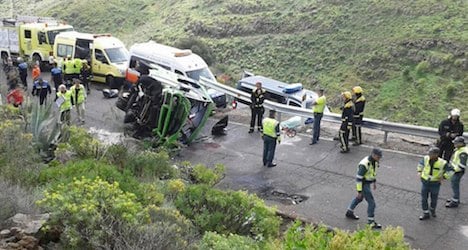 Rescue services including a medical helicopter were scrambled to the scene of the accident on a road in the eastern part of the island, a police spokesman said.

The cause of the accident was unclear, with police saying the incident was under investigation.

The Swiss company that operated the minibus said there was not enough information to initially confirm the number of people injured or killed announced by Spanish authorities.

The passengers were members of a group of tourists staying at the Parador Nacional de la Cruz de Tejeda, local daily Canarias7 reported.

JuanJosé Gil, a local mayor interviewed by TV station RTVC, said the tourists were elderly hikers, equipped for trekking and travelling in a bus run by Baumeler Reisen, a Swiss travel agency based in Lucerne.

Gil said the road could have been slippy as a result of rain that fell the previous night.

Baumeler Reisen issued a statement confirming the accident but adding that details on the victims had not been confirmed.

The company said that 16 tourists, a woman accompanying the group and a Spanish driver were on board the bus, which was new.

The Swiss Department of Foreign Affairs said it had made aware of the accident involving the vehicle, which it said was carrying 18 people, including 17 Swiss.

Touring Club Schweiz (TCS) was sending a support team to Gran Canaria on an aircraft expected to land there at midnight, the agency said.

Many of the tourists took out travel insurance from TCS.

Meanwhile, Rega the Swiss emergency rescue service, said it was sending a plane from Zurich with a medical team, including two doctors, a specialist in intensive care and a psychological counsellor, ATS said.

That aircraft was scheduled to arrive at Gran Canaria by 11pm.

The Rega team is prepared to transport some of the injured Swiss back to Switzerland on Tuesday and another plane is on standby, if needed, the organization said.

The injured Swiss were initially taken to Las Palmas for treatment before being sent to hospitals in Negrin and Insular, according to Spanish police.

Gran Canaria is a popular holiday destination that forms part of the Canary Islands archipelago lying 150 kilometres off the northwest coast of Africa.