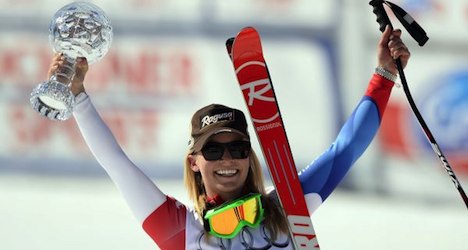 Gut won the super-G race and her seventh title this season with a time of one minute 17.14 seconds, ahead of Austria’s Anna Fenninger, who was 0.61 seconds behind, and Slovenia’s Tina Maze, 0.95 seconds adrift.

The victory for the 22-year-old Ticino native comes a day after she same first in the women’s downhill at Lenzenheide.

“I thought I had almost a little slowed down,” Gut told Swiss TV upon being asked if she thought she had a fast run.

“It looked more complicated than it was at the end.”

The result was enough to give the crystal globe trophy to Gut, who ended up with 448 points in the super-G category, ahead of Fenninger with 357.

It marks the first time a Swiss women has won the super-G title since Michela Figini, also from Ticino, claimed the trophy in 1988.

It’s the first Alpine skiing title for the Swiss team since 2002.

While the Swiss skier stopped Fenninger adding the World Cup super-G title to the Olympic gold she won in the discipline in Sochi, the Austrian has now clinched the women’s alpine skiing overall World Cup title.

With just a slalom and giant slalom to go, Fenninger, 24, cannot be caught after the cruel injury suffered by rival Maria Höfl-Riesch, of Germany in Wednesday’s downhill race.

The German said she "cried all night" afterwards and is now thinking about retiring.

"I will announce my decision in the coming days," she told ARD German television.