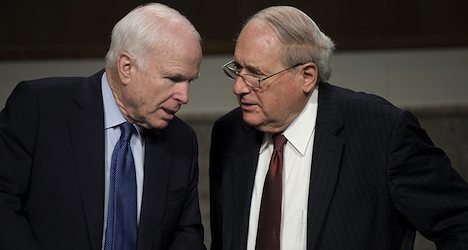 Senator Carl Levin, a Democrat from Michigan, and Senator John McCain, a Republican from Arizona, have written an open letter calling on Washington to seek extradition for the criminally charged individuals.

The duo heading the US Senate’s permanent subcommittee on investigations underlined in the letter made public on Tuesday that American justice authorities have “not sought the extradition of a single Swiss national” in the past five years.

The justice department says it has charged 35 bankers and 25 financial advisers with misconduct related to facilitating tax evasion.

Of these, six have been convicted or pled guilty “and the majority of the rest apparently live openly in Switzerland, having avoided trial on their alleged crimes for years”, Levin and McCain say in their letter.

It noted the DOJ testified to the committee that it had not asked Switzerland to extradite any of the defendants because it believed “the Swiss will not extradite its citizens.”

But the senators said the extradition treaty between the US and Switzerland does not bar the extradition of Swiss citizens who helped Americans “in the commission of criminal tax evasion”.

The pair said it was time to “test the Swiss government’s professed willingness to cooperate with international tax enforcement efforts and put an end to its nationals participating in criminal tax offences”.

While an article of the extradition treaty gives the Swiss government discretion in denying US extradition requests related to tax offences, “that discretion is limited”, their letter says.

The treaty states that it cannot  be used to "shield from extradition underlying criminal conduct, such as fraud . . . or falsification of public documents”.

At least some of the charges against the 54 bankers and financial advisers “appear to meet that standard”, Levin and McCain say.

There is provision in the treaty to allow Switzerland to prosecute the individuals charges, however the Swiss do not regard tax evasion as a criminal act.

Even if extradition requests are unsuccessful, they will “inform both Switzerland and its citizens that the United Nations is ready to make full use of available tools to stop facilitation of US tax evasion and hold alleged wrongdoers accountable”, the senators said.

A US justice department official told the Wall Street Journal that extradition proceedings would be a poor use of resources and that it was focusing on other ways of pursuing tax evasion cases.

Last month in a senate hearing, McCain faulted the DOJ for not clamping down on Swiss bankers.

But there are signs the department is getting tougher with Swiss banks, according to the Wall Street Journal, which cited the surprise return to the US last week of former Credit Suisse banker Andreas Bachmann to face a 2011 tax evasion indictment.

Bachmann admitted to helping Americans evade taxes in exchange for leniency and being allowed to return to Switzerland before sentencing.