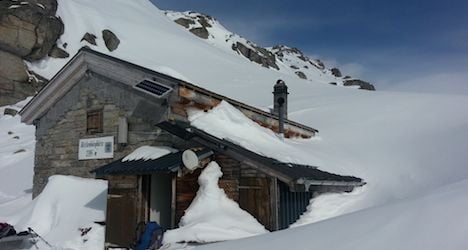 The Mittlenberghütte, a mountain hut where the victim was headed. Photo: Mittlenberg.ch

The man was swept away by a snow slide while ski touring on Sunday in a mountain region of the canton of Valais, cantonal police said.

The man managed to dig himself out from the snow, police said.

He and his girlfriend were travelling toward the Mittlenberghütte, a mountain hut at an altitude of 2,395 metres in the Binn Valley, near the Italian border.

When they realized they could not reach the hut because night had fallen and thick fog cloaked the area, they built an igloo, where they passed the night, police said in a news release.

Air Zermatt and local rescue officials responded to the call but when they arrived the man was dead.

The public prosecutor has ordered an investigation into what happened.

The privately owned Mittlenberg stone hut, used as an observation post during the Second World War, has been renovated to accommodate up to 23 skiers or hikers