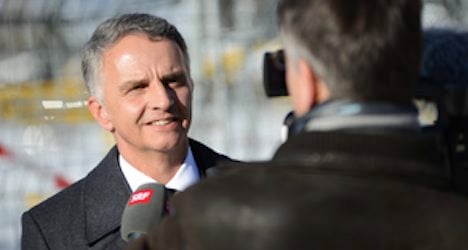 "The position of our country is independent of the UN," Swiss president Didier Burkhalter told a press conference in Bern, saying Switzerland can only use sanctions when they are based upon "international law and the interests of the Swiss".

"And in this case the rights and the interests play a role… we need to find a balance," he added, as well as noting that Russian interests in Switzerland were "very large".

"The federal council has noted the sanctions imposed by the European Union and the United States," he added.

Burkhalter said some sanctions imposed by the EU would apply to Switzerland, including a ban on the freedom of movement of some Russian nationals as Switzerland is a member of the Schengen group of European countries, which allow passport-free movement between them.

Despite the decision not to impose sanctions, Burkhalter, who is also the country's foreign minister, said Switzerland would not allow itself to be used by those trying to get round the restrictions already imposed on Russia by the West.

"We do not want to circumvent the sanctions," said Burkhalter.

He also condemned the Russian annexation of Crimea, saying there was no violation of human rights to justify Moscow's actions.

Since the beginning of the Ukrainian crisis, Switzerland has tried to tread a fine line between the various parties and in February ordered a freeze on assets held in the country by ousted president Viktor Yanukovych and his son, Oleksandr.

Earlier this month it announced it was looking into suspicions of money-laundering by the former president.

Switzerland has also frozen talks on a trade deal with Moscow and temporarily abandoned a training programme with the Russian military.

However, this year marks the 200th anniversary of relations between Switzerland and Russia and as part of the celebrations Burkhalter is supposed to visit Russia.

No date has yet been fixed.

The majority of Russian gas and petrol is traded in Geneva, and Switzerland is an increasingly popular destination for Russia's wealthy.