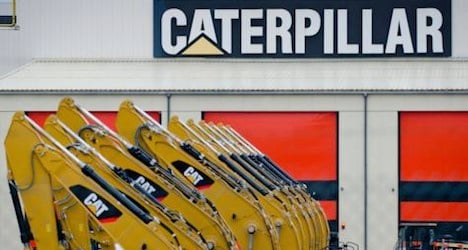 In a report released late on Monday, investigators said the company took advantage of a special corporate tax deal negotiated with authorities in the canton of Geneva that allowed it to defer or avoid paying $2.4 billion in US taxes.

The report, released by Senator Carl Levin, chairman of the Senate Permanent Subcommittee on Investigations, said the company instead only had to pay Swiss authorities $55 million under the strategy.

"That tax strategy depends on the company making the case that its parts business is run out of Switzerland instead of the US so it can justify sending 85 percent or more of the parts profits to Geneva," Levin said in a statement.

Caterpillar executives will face questions in a hearing by the committee on Tuesday, following similar probes into tax avoidance by US giants like Apple and Microsoft.

The investigation says the Peoria, Illinois-based company, with $56 billion in sales last year, used to book its sales of parts around the world — mostly made in the US —  on its American tax report.

But beginning in 1999 it shifted at least 85 percent of its parts sales profits to Geneva, which home to the company's regional European, African and Middle East headquarters.

"Caterpillar accomplished that profit shift without making any real changes in its business operations," the report said, noting the parts business was still run from the United States.

In a statement ahead of the hearing, Caterpillar's vice president for financial services Julie Lagacy said the company complies with US tax laws.

"In fact, Caterpillar's effective income tax rate averages about 29 percent, which is one of the highest for a US multinational manufacturing company."

Levin's interest in Caterpillar's Swiss arrangements comes a month after Levin and ranking committee member Senator John McCain (Republican – Arizona) called for the extradition of more than 50 Swiss bankers  and financial advisers who have been charged by the US justice department for aiding tax evasion.

Levin told the Tribune de Genève that Switzerland negotiated with Caterpillar a tax rate "between 25 percent and 50 percent less" than its usual level.

He estimated the company benefited from a tax on profits that ranged from four to six percent.

Levin alleged that Caterpillar, a company that employs 118,000 people worldwide, paid PricewaterhouseCoopers more than "$55 million for a Swiss tax strategy that has so far enabled it to avoid paying $2.4 billion in US taxes".

The strategy involves officially running the company's parts business out of Geneva, he said.

"Well I'm not buying that story."

Levin noted that only 65 of Caterpillar's 8,300 employees involved in parts work are in Switzerland.