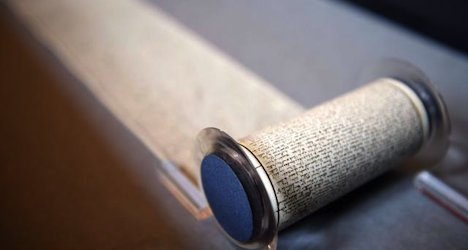 The parchment piece — recovered from a cell wall at Paris's Bastille prison — will go on display in the city from September to mark the bicentenary of the eighteenth century nobleman's death.

The 12-metre (39 foot) long scroll was found in its hiding place when the jail was stormed during the 1789 French revolution and over the years has repeatedly changed hands and had its ownership disputed through the courts.

Described by Sade as "the most impure tale that has ever been told since our world began", the novel was published in Germany in 1904 after being acquired by a German psychiatrist.

The draft scroll was bought in 1929 by the husband of Marie-Laure de Noailles, a descendant of Sade's, and it was passed down to their daughter, Nathalie.

She, in turn, entrusted it to Jean Grouet, a publisher who without her knowledge smuggled it into Switzerland in 1982.

Nathalie de Noailles took legal action to get the manuscript back but Switzerland's top court ruled that Nordmann had bought it in good faith.

So it stayed in Switzerland, where which it was a decade ago put on display for the first time at the Bodmer Foundation in Cologny, in the canton of Geneva.

But Gérard Lheritier, president and founder of Aristophil, a firm specializing in rare manuscripts, recently bought the scroll from Nordmann's son, Serge.

Lheritier paid seven million euros ($9.6 million) for the manuscript but some of the money went to Carlo Perrone, Nathalie de Noaille's heir, who was considered by French justice authorities to be its legitimate owner.

"A share of the seven million euros will go to the Nordmann family, the legal holder of the scroll, according to Swiss justice, the other share to Carlo Perrone, Nathalie de Noailles' heir," Lheritier said.

Without this agreement for part of the proceeds to go to the de Noailles family, he explained, it would have been seized by the authorities on its return to France due to a 1990 decision in the family's favour by France's high court.

Lheritier has brought the rare document to France so that it can go on display to the public at his private Museum of Letters and Manuscripts in Paris.

He said he would one day like to see the manuscript in the hands of the National Library of France.

"I had proposed keeping the scroll for five years and then gifting to the library but the Ministry of Culture has not acted on this," he told AFP.