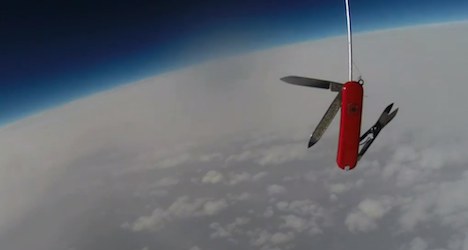 Samuel Hess, a resident of Dietlikon, accomplished the feat in mid-February, the 20 Minuten newspaper reported.

“When I saw for the first time a video showing the flight of a weather balloon into the stratosphere, I knew I wanted to do the same thing,” Hess told the newspaper.

When he saw how complicated and costly this would be, he initially shelved the idea.

But then he realized that the cost of such a project wouldn’t be too much for a company, Hess told 20 Minuten.

“I told myself all I needed to do was to find sponsors for my project,” he said.

After receiving negative responses, Hess finally attracted the interest of Victorinox, the Swiss army knife producer based in the canton of Schwyz.

“We gave him the opportunity to present his project,” Victorinox spokesman Urs Wyss told 20 Minuten.

“We found the idea interesting and wanted to know exactly what he was thinking of.”

Hess’s detailed presentation convinced the company to finance the project.

The teen was able to put his plan into action on February 15th when he released weather balloon from Adlikon in the canton of Zurich, according to the report.

With a diameter of three metres, the balloon was equipped with a camera, GPS, a parachute and, attached to a cable, a Swiss army knife.

The balloon lifted off and reached the stratosphere, 30,000 metres high, in an hour and a half.

The balloon exploded as expected and the parachute carried the payload, including the camera and the knife back to earth, 20 Minuten said.

The camera on board captured an image of the knife floating up to the stratosphere and returning to a field.

The knife landed outside of Switzerland but not far away, near the southern German town of Augsburg.

Last weekend, students from a school in Jolimont in the canton of Fribourg went a step further by sending a fondue pot (caquelon) into space in the same manner.