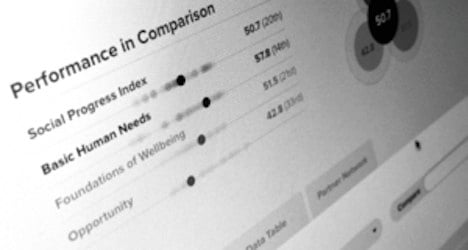 The Swiss lag only behind New Zealand in the Social Progress Index 2014, which measures such factors as basic human needs, education, healthcare and personal rights.

The report, issued on Thursday by the Social Progress Imperative, puts Switzerland ahead of Iceland, the Netherlands, Norway, Sweden, Canada, Finland, Denmark and Australia, all ranked in that order in the top 10.

The United States ranks 16th in the index, with European countries dominating the top rankings among the 50 countries covered.

Chad is at the bottom of the table, ahead of the central African Republic, Burundi, Guinea and Sudan.

The index shows that economic growth does not "automatically" lead to social advancement, Michael Green, executive director of the Social Progress Imperative, said in a statement.

It "shows that if we are to tackle problems such as poverty and inequality, economic growth alone is not enough".

While Switzerland has a per capita GDP that is one of the world's highest, it is outperformed for social progress by New Zealand, which has a much lower GDP level but scores particularly well on political rights, access to modern communications and school enrollment.

The index benchmarks the way countries meet needs such as nutrition and basic medical care, water and sanitation, shelter and personal safety.

It measures how well countries provide access to “basic knowledge”, information and communications, their levels of health and wellness and their “ecosystem sustainability”.

It also gauges personal rights and freedom, tolerance and access to advanced education.

The index indicates that Switzerland is a high-income country that has also made good social progress, scoring well for ecosystem sustainability, personal safety. life expectancy and religious freedoms.

“Switzerland does best in areas including water and sanitation and has the greatest opportunity to improve human wellbeing by focusing more on shelter,” the Social Progress Imperative says.

The mountain country “excels at providing building blocks for people's lives such as access to information and communications but would benefit from greater investment in Health and Wellness,” the group says.

“Switzerland outperforms in providing opportunities for people to improve their position in society and scores highly in Personal Freedom and Choice yet falls short in access to advanced education,” it added.

The group said the original idea for the index was conceived within the Geneva-based World Economic Forum’s Global Agenda Council on Philanthropy and Social Investing.

In 2009, the council proposed creating a new index, inspired by the Global Competitiveness Index (GCI), to spur competition between nations to improve the environment for social innovation in the way the competitiveness index has done for enablers of economic growth.