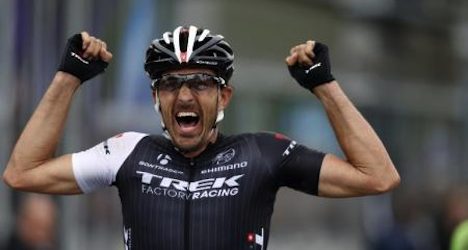 Cancellara, known as Spartacus in cycling circles, joined five other riders in winning a record three Tours of Flanders.

After six and a half hours of thrilling racing, the 33-year-old proved not only the strongest, but the master tactician.

Van Avermaet had made an attack 31km from home with Vandenburgh, who was working for three-time winner Tom Boonen, covering the move.

Vandenburgh gave Van Avermaet no help but their break lasted until the final difficulty of the race, the thigh-busting Paterberg climb 12km from the end.

At that point Van Avermaet dropped his compatriot but by then, Cancellara and Vanmarcke were closing in.

Cancellara had made his move 5km earlier as he attacked the chase group on the third ascension of the tough Oude Kwaremont.

That group had been a minute behind the two leaders but Cancellara's attack, which was followed only by Vanmarcke, proved devastating and quickly ate into the two leaders' gap.

Van Avermaets held on ahead of the trio behind for a few more kilometres but he was reeled in with 7km left.

Vandenburgh still refused to help the other escapees but Cancellara bided his time and when it came down to a game of cat and mouse inside the final few hundred metres, he was the one who took the initiative and used his strength to attack at just the right moment and make it stick.