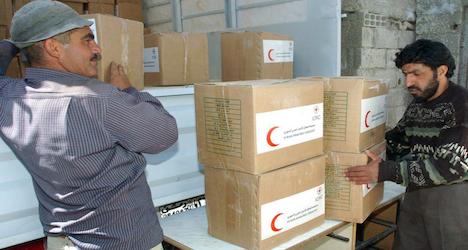 "The scale of the conflict in Syria is unprecedented, and the stark truth is that there is no end in sight," said Robert Mardini, who heads Near and Middle East operations at the International Committee of the Red Cross (ICRC).

"The bleak reality is that the needs are growing at a much faster pace than the humanitarian aid being provided on the ground," he told reporters in Geneva.

The ICRC, he said, needs $212 million (153 million euros) this year – $84 million more than previously estimated – to help address the needs of Syrians both inside the country and in the surrounding region.

The amount far exceeded any other ICRC operation worldwide at least since the Balkans crisis 15 years ago, Mardini said.

He acknowledged that regardless of how much aid his organisation or others poured into helping people in Syria, "it is simply not enough and does not match the sheer size of the needs".

"No words or qualifiers can do justice to what is happening in Syria today," he said.

Some 150,000 people have been killed during the past three years of civil war and half the country's population has been forced to flee their homes, including the nearly three million refugees who have flooded into neighbouring countries.

Most of the cash requested by the ICRC – $157 million of it – is meant to go to the organisation's activities inside the war-torn country, while the remainder will go to aid operations in Lebanon, Jordan, Egypt and Iraq.

More than funding, the main concern for the organisation in Syria was the lack of access to tens of thousands of people in need, especially in besieged areas, Mardini said.

In a bid to overcome constraints linked to violence and mistrust, the ICRC is attempting to intensify its dialogues with different parties to ensure it can bring food, medical care and other necessities to where they are most needed.

"Our priority is clearly Aleppo. We have a very substantial plan of response for Aleppo, that would include medical, surgical aid, food and non-food items," Mardini said, adding however that the organisation was still waiting for the go-ahead from Damascus.

The ICRC also aims to increase its presence on the ground in Syria, with plans to add 50 more local employees bringing the total to 250, and to increase the number of expatriate workers to 65-70 from 40.

In an attempt to reduce the widespread rights abuses in Syria, the organisation has also held around a dozen training classes in international humanitarian law for opposition military commanders.

Since the beginning of the conflict, the ICRC has however not been able to hold such courses for members of the Syrian army, Mardini said.