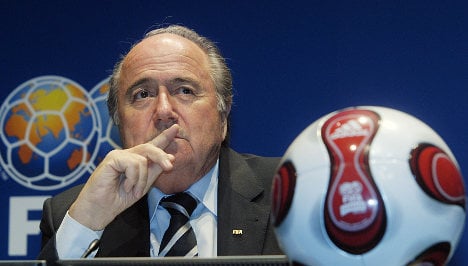 Blatter: "My mission is not finished." Photo: Marcello Casal Jr.

"I want to do this, because things aren't over yet," the 78-year-old Swiss was quoted as saying by the tabloid.

"My mandate is running out, but my mission is not finished."

Blick said that Blatter's comments came in response to questions about his future during a debate it had organized between representatives of the Swiss business and sporting world at the Zurich headquarters of its publisher, Ringier.

FIFA, which is also based in Zurich, has been steered by Swiss citizen Blatter since 1998.

He has previously been guarded about his plans for a new term, and will still need to throw his hat into the ring officially.

His decision to show his hand comes just weeks before the World Cup kicks off in Brazil on June 12th.

The only candidate to have entered the race formally so far is Frenchman Jérôme Champagne, an ex-diplomat and former secretary general of FIFA, who left the organization in 2010.

Champagne, 55, has said that if his former boss Blatter enters the race, he will pull out.

All eyes in the upper echelons of world football will now be on Michel Platini, head of European governing body UEFA.

The 58-year-old former France international has said that only he can beat Blatter in the race for the FIFA leadership.

But Platini, in charge of UEFA since 2007, has still not said whether he will run in next year's election.

In March, Platini has said that he was likely to announce his decision after the World Cup, which ends on July 13th.