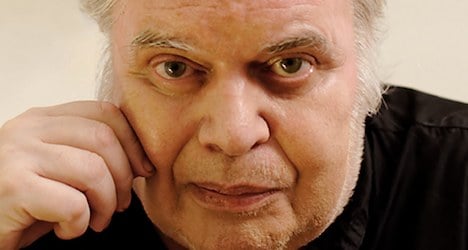 The surrealist painter, sculptor and set designer, known as H.R. Giger, died in hospital following a fall, according to the report.

A native of the canton of Graubünden, he was best known for his design of Alien, an American science-fiction horror film from 1979 directed by Ridley Scott, and was part of the special effects team that won an Academy Award the following year.

Giger’s design for the film was inspired by his painting Necronom IV.

He was known for his airbrushed silver and grey canvasses depicting nightmarish dreamscapes and “biomechanical” human figures linked to machines.

Born in Chur in 1940, he studied architecture and industrial art at Zurich’s University of Applied Sciences (ZHAW).

A friend of Timothy Leary who was influcenced by surrealist painter Salvador Dali, he reportedly suffered from nightmares that he said inspired some of his work.

Books of his paintings and use of his art for music albums and in publications, such as the American science and science fiction Omni, led to his rise in international fame.

His artwork adorned the cover of albums by artists such as Emerson Lake & Palmer, the Dead Kennedys and French singer Mylène Farmer.

In 1998, Giger acquired the Château St. Germain in Gruyères, a village in the canton of Fribourg, to house his work in the H.R. Giger Museum.

He lived and worked in Zurich-Seebach, SRF said.

For all his fame, Giger said he did not gain "big money" from his work in the movies, Zurich newspaper Tages Anzeiger reported.

Others, he said, cashed in on his creative work.

"My design was done and changed," Giger is quoted as having said.

"The film business is a gangster business."