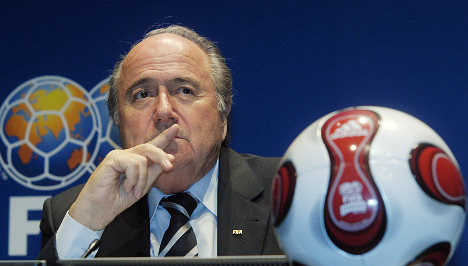 When asked if it was a mistake choosing as host Qatar because of the country's high temperatures in summer months, Blatter said in an interview with Swiss broadcaster RTS: "Yes, of course."

"You know, everyone makes mistakes in life," he added.

"The Qatar technical report ruled that it was too hot in the summer, but the (FIFA's) executive committee, with a large majority, decided to play in Qatar," said Blatter.

In these circumstances, "it is more than likely" that the 2022 World Cup will be played in winter, said Blatter, who has repeatedly expressed his desire to move the tournament to a more appropriate date.

Temperatures in the winter in Qatar are around 25 degrees.

"The best time to play is at the end of the year," Blatter said.

"You must remain realistic . . . we must play in winter at the end of the year."

Following Blatter's comments, FIFA issued a statement saying that they were fully in line with previous statements on the matter.

"As explained in his answer to the journalist, the President reiterated that the decision to organize the World Cup in summer was an "error" based on the technical assessment report of the bid, which had highlighted the extremely hot temperatures in summer in Qatar," the statement said.

"At no stage did he question Qatar as the host of the 2022 FIFA World Cup."

Blatter's comments accord with the position taken by his number two, FIFA secretary general Jerome Valcke, who said in January that the 2022 World Cup should be held ideally between November 15th and January 15th.

A decision on whether the tournament will be moved from summer to the winter in eight years' time has been postponed by FIFA until after next month's World Cup finals in Brazil.

FIFA took the controversial decision to award Qatar the World Cup in December 2010, handing the organization of the biggest sports event in the world to the tiny Gulf emirate that has become a power in world sport on the back of its immense wealth based on natural gas deposits.

Since then the decision has been dogged by controversies over the validity of the vote, the treatment of foreign workers employed on World Cup infrastructure projects, as well as the date of the tournament.

Blatter insisted however that Qatar had not "bought" the World Cup — the bid did spend large amounts of money on sponsorship and development programmes.

"No, I have never said it was bought," he said, but admitted to "political pressures" coming notably from France and Germany, both of whom, he said, had economic interests in the Gulf region.

"We know perfectly well that big French companies and big German companies have interests in Qatar," he said.

"But they are not only involved in the World Cup."

Blatter, 78, also said in the interview that he did not expect UEFA chief Michel Platini to stand against him next year when the Swiss hopes to ensure a fifth term as FIFA president.

"You will have to ask him that question, but I don't think so, surely not," he said.