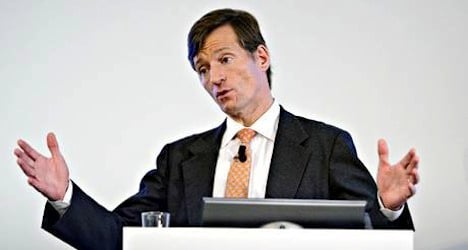 "We were running a criminal enterprise, but we didn't know," reads the document cited by the weekly SonntagsZeitung.

Switzerland's second largest bank was expected to sign the document, obtained by the paper from lawyers close to the case, in a bid to avoid criminal prosecution in the United States, it reported.

The conditions for resolving the bank's tax dispute with Washington could be published as early as Monday, the paper said.

The bank itself refused to comment on Sunday's report.

Credit Suisse is one of 14 Swiss banks under criminal investigation by the US Justice Department on suspicion they helped wealthy American clients hide billions of dollars in assets from tax authorities.

A damning US Senate report found that Credit Suisse at its peak in 2006 had more than 22,000 US customers with Swiss accounts whose assets stood as high as $12 billion — mainly undeclared — to US tax authorities.

Chief executive Brady Dougan apologized in February to US senators for the bank's actions, conceding it had undertaken elaborate efforts to gain new, secret American clients, but blamed the wrongdoing on a small band of rogue employees.

The bank is expected to be slapped with a massive fine of at least $1 billion, with reports suggesting it could run well above double that amount.

Swiss Finance Minister Eveline Widmer-Schlumpf visited Washington at the beginning of May in a bid to ensure "Swiss banks are not treated more severely than those of other countries," according to Bern.

Credit Suisse chairman Urs Rohner, meanwhile, told shareholders earlier this month that the bank was "doing everything we can to resolve this matter".

"The resolution of the tax dispute is one of the most pressing issues currently facing Credit Suisse," he said at the company's annual general meeting.

The affair has led some politicians, including Christian Levrat, head of the Socialist party, to call on top brass at the bank to resign.

He added that the bank's difficulties could potentially hurt the Swiss economy.