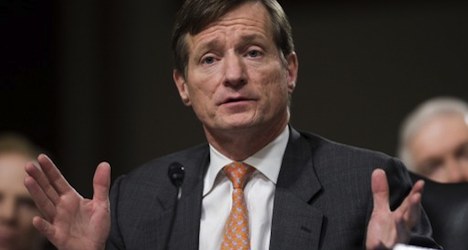 The bank admitted to helping Americans cheat on their taxes, and while it did not disclose the names of the clients involved, it promised to help US investigators.

Despite the enormity of the fine, Dougan, who earlier blamed ¨rogue employees"  for the tax evasion involvement, said the penalty would have “very little impact” on the bank’s business.

“We have worked very hard to settle this affair,” the CEO is quoted as saying by ATS, the Swiss news agency.

“We have done good work,” he said.

“Personally I have made it a priority.”

Dougan, who has been Credit Suisse’s chief executive since 2007, said he remains very committed to the bank and that stepping aside has "never been a consideration".

Although he said the US penalty will have little impact on the bank’s results, Credit Suisse said the settlement would reduce the company’s second quarter income by almost 1.6 billion francs.

The Zurich-based bank earlier set aside 892 million francs to deal with the issue.

The bank said it intends to sell surplus real estate and other “non-core assets” to improve its capital situation in the wake of the financial penalty.

“Having this matter fully resolved is an important step forward for us,” Dougan said in a statement issued on the Credit Suisse website, in which he expressed regret for the past “misconduct” that led to the fine and guilty plea.

“We have seen no material impact on our business resulting from the heightened public attention on this issue in the past several weeks,” he said.

“We want to thank our clients and employees for their support as we continued to work through this matter and brought it to a conclusion,” Dougan added.

“We can now focus on the future and give our full attention to executing our strategy.”

“it is incomprehensible that the resignations of the leaders have not already happened,” Levrat is quoted as saying by ATS.

Investors, however, appeared to welcome the resolution of the legal dispute with the US, pushing up Credit Suisse shares by more than two percent in Tuesday morning trading.

Jean-Christophe Schwaab, president of the bank employees association for French-speaking Switzerland, praised the settlement achieved by the bank, which faced losing its licence to do business in the US.

But he said it was up to shareholders and management to pay the fine, meaning “no bonuses for managers and no dividends for shareholders”.

The Swiss Bankers Association (SBA) said the agreement with the US allows Credit Suisse to "again concentrate fully on its business activities”.

Credit Suisse did not divulge the names of American clients who cheated on their taxes.

However, US authorities can only request such assistance in cases when they suspect a citizen is guilty of tax evasion.

“Credit Suisse is going to provide us a lot of information,” deputy US attorney general James Cole said at a news conference on Monday, according to Bloomberg.

The Swiss federal government lauded the Credit Suisse settlement for resolving a long-standing legal dispute without the bank losing its US licence and without the use of Swiss “emergency legislation”.

In an earlier case, UBS, Switzerland's largest bank,  was forced to hand over more than 4,400 names of wealthy US clients after it agreed in 2009 to pay a $780 million penalty for aiding tax evasion.

The agreement required the Swiss parliament a year later to pass a special law, applicable only to the UBS case, to circumvent the country’s privacy laws.

The SBA said it expects that other Swiss banks will now reach agreements with the US Department of Justice similar to the one with Credit Suisse “which should also be consistent with the principles of fairness and proportionality”.