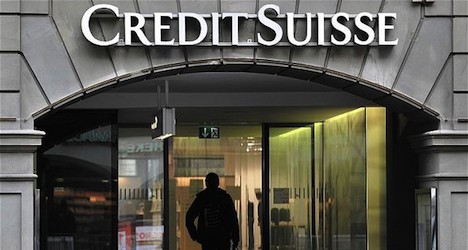 Late Monday, Switzerland's second largest bank pleaded guilty to conspiracy and aiding in tax evasion and agreed to pay a whopping $2.6 billion in fines to US authorities.

This marks by far the highest penalty ever imposed on a Swiss bank, and is more than three times the $780-million fine Washington in 2009 slapped on the Alpine country's biggest bank, UBS, which unlike Credit Suisse was not required to plead guilty to settle a similar dispute.

While the treatment of Credit Suisse may appear harsh, the bank itself voiced relief that the issue had been settled and the burden of uncertainty that has weighed on it for months had been lifted.

"We have worked very hard to get this business fixed and cleaned up," chief executive Brady Dougan told reporters in a conference call on Tuesday, adding: "I think we've done a pretty good job with that."

Most important perhaps was that the bank will be permitted to continue operating in the United States without fear of losing its license.

This has been dragging on for too long, and (the bank) was afraid, with justification, that it would no longer be operational in the United States,"

Aware that it faced a huge legal penalty, Credit Suisse had already set aside almost $1 billion to cover eventual costs, and while the towering penalty will still sting, Hornung and other observers said it was nothing the bank could not handle.

'Will quickly blow over'

"We remain convinced that this will quickly blow over, as similar large fines have been levied on other banks," Helvea analyst Tim Dawson said in a note, mentioning UBS as an example.

Taking into account its provisions, Credit Suisse has said it will book an additional after-tax charge of 1.59 billion francs in its second quarter accounts.

Swiss Finance Minister Eveline Widmer-Schlumpf hailed the settlement, telling reporters Tuesday she was "very happy" that a solution had been found, and that she hoped it would be possible to quickly settle the disputes with other Swiss banks as well.

Credit Suisse was one of 14 Swiss banks under criminal investigation by the US Justice Department on suspicion they helped wealthy US clients hide billions of dollars in assets from tax authorities.

Widmer-Schlumpf stressed that each of the banks would individually negotiate separate settlements, and that the fine imposed on Credit Suisse should not be seen as an indicator of what they had coming.

ZKB also told AFP in an email that "this settlement does not allow any conclusions for the other Swiss banks in category 1," stressing that "each case is different and will be looked at individually."

Hornung however said the Credit Suisse case should be seen as a clear guide to which way the wind would blow for the others.

"The Americans are quite logical. I can't imagine that for the other banks in category 1 the treatment would be very different," he said.

A damning US Senate report earlier this year found that Credit Suisse — one of the world's biggest wealth managers — at its peak in 2006 had more than 22,000 US customers with Swiss accounts whose assets stood as high as $12 billion — mainly undeclared to US tax authorities.

Bank chief executive Dougan, meanwhile, told the committee the amount was closer to $7.0 billion at its peak.

The penalties against the bank, which when counting a $196-million fine to the Securities and Exchange Commission in February amount to $2.8 billion, thereby adding up to about 25 percent of the undeclared funds it managed, Hornung pointed out.

"That's not so bad in the end," he said, speculating that the other banks would likely be fined somewhere between 20 and 30 percent of the peak amount of the undeclared funds they had managed.

"Credit Suisse has set a precedent," he said.