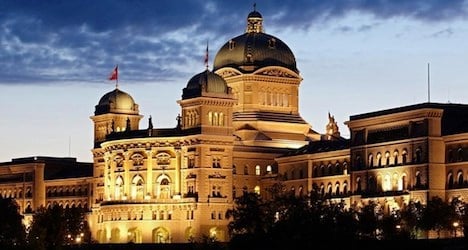 In a bid to avoid any confusion, the federal government supported on Thursday a motion to ensure that Swiss flags are always strategically flying from the building year-round.

The government was responding to a motion from Swiss People’s Party MP Yvette Estermann, who is concerned that visitors mistake the domed edifice for a house of worship rather then a place for representatives of the people to pass laws.

The building, begun in 1852 and further expanded in 1884 and 1902, features a central domed hall with two two towers topped with cupolas.

The entrance is marked by neoclassical columns and arched windows.

But a cross on the dome leads tourists to sometimes mistake the building for a church, Estermann said in a motion she filed in March.

The MP for Lucerne said it was important to that the building should be immediately recognizable as the seat of parliament.

Currently, when parliament is not in session, no flags fly from the building.

The government agreed to have Swiss flags permanently in place above the two cupolas at the south end of the building, in addition to the Swiss ensign hoisted over the main entrance when parliament is sitting.