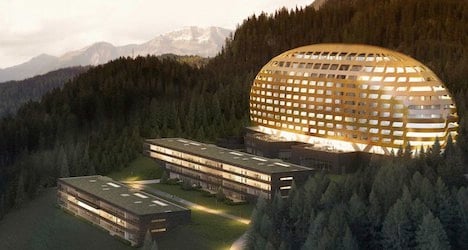 The 216-room InterContinental Davos hotel, with 38 holiday apartments, opened to fanfare last year as one of the biggest hotel projects in the Alps.

But Stilli Park, the real estate company operating the five-star hotel, filed for bankruptcy in the district court of Chur, in the canton of Graubünden, the company’s chairman Martin Buchli told the SDA news agency.

The company had leased the hotel from Credit Suisse Real Estate Fund Hospitality and arranged with the InterContinental group to run the hotel.

The failure of Stilli Park does not mean the hotel will close, however.

The deal with the new lease-holders will allow for a seamless continuation of the hotel ‘s operations, the country’s second-largest bank said.

It added that all 200 employees would be offered new contracts with the new tenant, which assumes around one million francs in debt, the SDA agency said.

The Credit Suisse real estate fund invested a total of 250 million francs ($278 million) into the “golden egg” hotel complex, including 155 million francs for the hotel itself, which was designed by Munich-based architect firm Oikios and Baulink from Davos.

The Living Design Group from Stockholm was responsible for the interior design of the hotel, which features a 10th-floor “sky lounge”, three restaurants and a 1,200-square-metre spa.

Stilli Park initiated the project before selling it to the Credit Suisse real estate fund in 2010.

For legal reasons, the fund is unable to run the hotel.

Stilli Park’s Buchli blamed a delayed opening of the hotel on December 19th instead of early November as planned for part of the operating company’s difficulties.

The delay was due to significant water damage, he told SDA.

The hotel may have been short on guests overall but it was reportedly fully booked for the 2014 World Economic Forum, which is held annually in Davos every January.