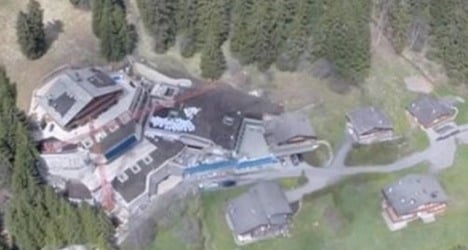 Locals have dubbed the chalet "Villa Putin" because of its Russian owners. Photo: Screenshot/RTS

Jacqueline de Quattro, the canton of Vaud’s land and environment minister, said on Tuesday that she asked the public prosecutor to investigate the situation after a halt to building on the site was ordered 15 days earlier.

Media reports have highlighted the ostentatious nature of the unfinished hillside complex in the Vaud Alps, which includes six underground levels beneath a three-storey home.

Swiss broadcaster RTS reported earlier this month that the property, owned by Alla Rybak, a naturalized Swiss woman originally from Moscow and her husband, includes a tennis court, swimming pool and a series of vast terraces.

Around 50 million francs ($56 million) has been spent on the site over the past nine years, the broadcaster said.

But the problem with the construction lies not in its size or budget but in the fact that cantonal and municipal laws have been violated, RTS said.

Citizens from Latvia have worked on the site without being declared, security regulations were flouted, proper permits were not obtained and the worksite is impinging on forest land, the broadcaster alleged.

A couple of local contractors told RTS they have not been paid for 1.3 million francs’ worth of work.

De Quattro said in a statement that her department was passing onto the prosecutor’s office “the facts to our knowledge because we think the regulations have been violated.”

But it will be up to the prosecutor to decide on the case, she said, adding that “we are not accusing or judging anybody”.

She noted that various professionals have been involved on the site, including architects, representatives of municipal services and the owners.

Rybak told the 24heures newspaper that the couple has acted on the basis of authorizations given by the municipality but had had difficulties with contractors.

“We are not cynical oligarch villains,” she earlier told the newspaper, noting that the couple’s dream home had turned into a nightmare.

It was originally expected to take two and a half years to complete and was designed to house their six children and two grand-children, she said.

She said reports of the value of the chalet were exaggerated and that it had been valued at 20 million francs, noting there were plenty of other large chalets in the municipality.

The work stoppage came as the final stages of the project were set to finish with the completion of walls and landscaping — two or three weeks’ work.

Rybak, who speaks French unlike her husband, admitted to making errors with the Latvian workers but said these were corrected.

After news of the criminal investigation, she told 24heures she hoped “it would re-establish the truth in basing itself on the reality and not on biased reporting where the facts were inflated.”