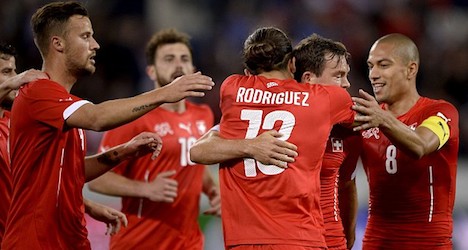 Switzerland’s team is raising hopes of a strong performance in the competition getting under way on June 12th in Brazil.

But on Tuesday, Vaud cantonal police let it be known that processions and tooting of horns will only be tolerated for up to an hour after the end of games.

The force said diversions will be put in place in urban centres to ensure traffic can run smoothly.

In the cantons of Geneva, Valais and Fribourg police said they would be tolerant — within limits — of displays of support for the home team or other teams.

But in German-speaking cantons, police have warned they will crack down on any excesses.

“And it doesn’t matter at what hour the match ends,” Cortesi said, although he added that a certain amount of tolerance will be applied.

In the canton of Thurgau, police have announced that public noise-making is limited to one hour after the whistle blows for games starting at 10.30pm.

For games that start at midnight, police will set a limit of half an hour for public victory celebrations.

The primary objective of the Thurgau cantonal police department is to ensure that “the population in Thurgau can feel safe during the World Cup”.

The force said it was prepared to arrest celebrants who ride on the roof or hood of vehicles and will take measures to block roads if necessary to reduce the risk of accidents.

While Swiss fans have high hopes for their team, a study by Goldman Sachs showed the Nati only have a 0.4 percent chance of winning the World Cup.

The study gives home team Brazil the greatest chance of clinching the cup, ahead of Argentina, Germany and Spain.

Switzerland’s side defeated Peru 2-0 in a friendly match in Lucerne on Tuesday night.

The win, sealed by goals late in the second half from Stephan Lichsteiner and Xherdan Shaqiri, was hardly reassuring, according to media observers who feel the team needs to improve if it hopes make a mark in the World Cup.

The Swiss side start their campaign in Brazil on June 15th with a match in Brasilia against Ecuador, ahead of games in Group E against France and Honduras.