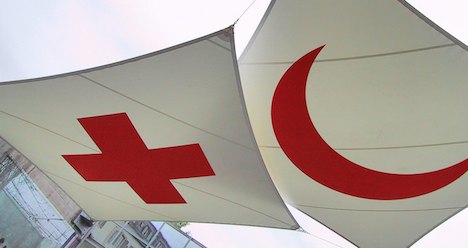 "The ICRC's head of mission in Misrata was killed today as he was carrying out a visit to Sirte," Red Crescent spokesman Mohamed Mustafa al-Misrati told AFP.

Misrati said the ICRC worker was killed when unidentified gunmen stopped his car in Sirte, 500 kilometres east of Tripoli, where he had been working with the Libyan Red Crescent's local branch.

The ICRC in Geneva confirmed the death of an employee in Libya.

"He was attacked by gunmen as he left a meeting with two colleagues," ICRC spokesman Wolde Saugeron told AFP.

"His colleagues are unhurt but in shock."

Saugeron said that the ambush took place at around noon (10am GMT).

"They were headed towards their car, which wasn't marked with ICRC insignia, in line with our operational rules in Libya," he said.

The attackers shot at "point-blank" range.

"Our organization condemns this murder," he said.

Since the popular uprising that toppled dictator Moammar Kadhafi in 2011, the country has been awash with heavy weapons and rival militias with varying ideological and political bents have controlled tracts of territory across the North African nation.

Attacks have targeted members of the security forces and foreigners in eastern Libya, particularly the city of Benghazi, where several powerful Islamist militias are based.

No group has claimed the attacks, but jihadist groups in the region have been blamed for the bombings and shootings.

Red Cross offices in Benghazi and Misrata were targeted in 2012, although they left no casualties.

Wednesday's fatal attack comes a day after the Red Cross and Libyan Red Crescent raised concerns about the humanitarian consequences of  armed violence in Libya, specifically in Benghazi.

"Dozens of people have died or been injured since the violence broke out," Dr Osama Azzam, the head of the health and first-aid department of the Libyan Red Crescent, said in a statement.

"An ambulance was destroyed and its driver killed in a targeted attack," Azzam said.

"One of our hospitals came under attack and was badly damaged, which resulted in its closure," he said.

"It is increasingly dangerous to take wounded or sick people to hospital for treatment.

CONFIRMED: earlier today, one of our staff members was killed in #Libya. More information to follow.