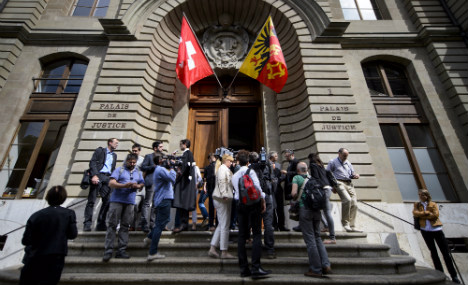 One of Sperisen's lawyers called the ruling "shocking" and announced that his client would appeal.

Guatemala President Otto Perez said his government respects the court's decision and would continue to follow the case as Sperisen fights the conviction.

Speaking from San Jose on an official visit, Perez called the charges against the former police chief "terrible," emphasizing they refer to crimes committed before his presidency.

Sperisen, 43, holds Swiss and Guatemalan citizenship and, having left his homeland for Geneva, could not be extradited to stand trial for killing prisoners in the mid-2000s.

But Swiss citizens can be tried at home for crimes committed abroad.

The case was launched after a lawsuit filed by the mother of one of Sperisen's victims, and the trial opened on May 15th.

Sperisen, who insisted he was innocent, was charged over the summary execution and subsequent cover-up of the murder of seven inmates in Guatemala's Pavon jail in September 2006.

He personally shot one of the prisoners dead, the court ruled.

But it rejected separate charges of involvement in the summary execution of three prisoners who had escaped from the Infiernito jail in 2005.

Cuendet said that Sperisen's motives were "egotistical and particularly disgusting", noting that his behaviour "showed a total lack of scruples".

She also said he had displayed no empathy towards his victims, and that simply bolstered the need to hand down a life sentence.

Sperisen, who is nicknamed "The Viking" due to his hefty build and ginger beard, remained calm as the verdict was read out, but several relatives in the public gallery gasped and began crying.

Appointed police chief in 2004, he left Guatemala in 2007 amid a scandal that saw him and the country's interior minister Carlos Vielmann resign that March.

His father is Guatemala's ambassador to the World Trade Organization, which is based in Geneva, and Sperisen was arrested in the Swiss city in August 2012.

He has been in jail since then, with Geneva justice authorities arguing that there was too great a risk that he would flee Switzerland if he was released on bail.

Sperisen's former right-hand man, Javier Figueroa, was called as a witness in the case.

Figueroa was prosecuted by Austrian justice authorities on similar charges, and acquitted in 2013.

Former interior minister Vielmann, who holds dual Guatemalan and Spanish citizenship, now lives in Spain and is due to be tried by a court there over the prisoner killings.