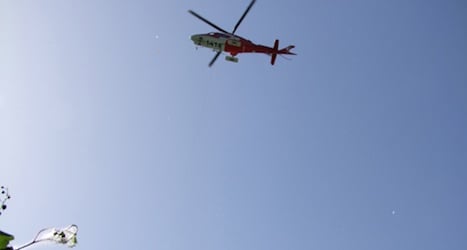 A 48-year-old paraglider from Austria died on Sunday afternoon near Scuol in the canton of Graubünden after plunging from a tailspin into the Inn River, cantonal police said on Monday.

Police believe the paraglider touched three power lines with his wing during his descent.

The man’s body was carried downstream by the current of the river to the piers of a footbridge.

Guides from a local river rafting school helped recover the body, along with cantonal police, police divers and a helicopter crew from the Rega emergency service.

Elsewhere in the canton on Sunday afternoon, a 43-year-old paraglider from the canton of Thurgau died after crashing in the area of Saas Calanda in Prättigau, cantonal police said.

The man was with four other colleagues who were planning, police said, to fly to Klosters from the top of the Fanas cable car lift.

While over the Saas Calanda area, one of the victim’s colleagues said he went into a “spiral dive” and crashed, police said.

He landed at an area 2,300 metres above sea level.

A doctor dispatched by the Rega emergency rescue service found the man was dead before he could deliver any treatment, police said.

Another paraglider — a 38-old-German man — lost control of his wing when it collapsed while he was flying at the mountain resort of Engelberg in the canton of Obwalden, the Blick newspaper reported on Monday.

The man died from injuries received upon impact with the ground.

Investigations into the three accidents are continuing.

But members of the paragliding community were surprised by the news.

“I am speechless to see so many accidents in a single day,” one paraglider posted in English on the ParaglidingForum.com website.

“I was flying on Saturday in the Engelberg valley, local conditions were not extreme (weak variables wind, warm temperature, some thermal activity but not strong) and it was like that all over Switzerland,” the poster said.

“Sunday was more or less the same.”

In another accident in the Swiss Alps, a 29-year-old Russian man died while mountain biking on Mount Pilatus in the canton of Nidwalden on Saturday night.

Cantonal police said the man was with another Russian tourist who had hoped to catch the Pilatusbahn mountain train down to Alpnachstad after starting a bike tour from Eigenthal.

But when they realized the train had stopped operating they changed plans and decided to descend on the Nauen trail.

The victim cycled over a cliff shortly before 8.36pm when Nidwalden police were informed of the accident, which is under investigation.