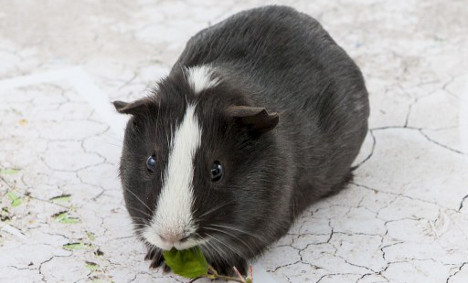 After her spot-on prophecy of a Swiss win in their opening match against Ecuador, Madame Shiva's skills have been put to the test for Friday's crunch Group E match.

The 20-month-old guinea pig is setting her sights lower than other animal tipsters by focusing only on Switzerland's games.

Her forecasts are made by placing her on a mini football pitch with the colours of the rival teams at either end.

After hesitating for a few moments in the French half, she finally moved into Switzerland's zone and, in a sign of approval, left a single dropping.

She was watched by former Switzerland manager, Frenchman Gilbert Gress.

"I don't agree, because Switzerland and France are going to draw, so they'll both have four points and will go through to the knock-outs," he said.

"Mind you, four years ago it was Paul, and I had a laugh. I'm not laughing any more, because four years ago, Paul was right about practically everything. So we'll see if Madame Shiva is as good."

Paul the German octopus won worldwide fame by correctly predicting the results of several games at the 2010 World Cup using its tentacles. He died shortly after the tournament.

Paul’s success spawned imitators for Euro 2012 including a pig, an Indian elephant and a raccoon.

Besides Madame Shiva, other cuddly pundits aiming to claim the tipster crown at this World Cup include a squad of baby pandas in China.

In addition to tongue-in-cheek predictions, Swissaid has deployed Madame Shiva to spread a non-football message.

The charity works with smallholders in Latin America, where guinea pigs are raised for meat and their droppings made into organic compost. It aims to raise awareness of the animals' role.