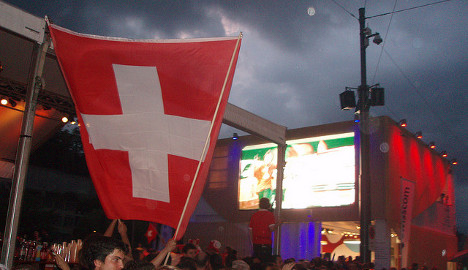 Speaking to newspaper 20 Minutes, one manufacturer said the sale of such flags to patriotic football supporters was up 40 percent on those sold during Euro 2012.

But the flags can be an issue if they cover indicator lights, considered by police to be an illegal modification of the vehicle and therefore subject to a fine.

One driver fined by police in the canton of Bern for such an offence told 20 Minutes: “It’s a new source of income for the police force and they are very interested in that.”

Authorities around the country have denied they are in hot pursuit of flag-bearers.

“But if we come across such a case during a routine check then we will act,” said René Ruf of the Zurich cantonal police.

The news is a further blow to football fans looking to support their teams during the course of the World Cup, which began on June 12th and runs to July 13th.

Earlier this month police warned that celebratory processions and the tooting of car horns would only be tolerated up to one hour after a game.

This week the authorities in Thun in the canton of Bern said they intend to close certain town centre streets on match evenings after a procession of cars celebrating Switzerland’s win over Ecuador on June 15th drew complaints from residents.

Speaking to newspaper Thuner Tagblatt, the town’s security official said: “It’s like always, you give them an inch and they take a mile. The World Cup is a festival, but that shouldn’t prevent moderation.”

Some fans reacted angrily, with one saying that the decision to close the streets “deprives us of any remaining pleasure.”

The national team, known as the Nati, plays its second Group E match against France this evening at Salvador's Arena Fonte Nova.

Both teams have wins under their belt after France beat Honduras 3-0 while the Swiss needed a last-gasp goal to see off Ecuador 2-1.

Though sixth-placed Switzerland are 11 places higher than the French in FIFA’s rankings, Switzerland coach Ottmar Hitzfeld says his team will have to give everything to beat Les Bleus.

"We're in a special position with France being our neighbours and it's a derby, so to speak, but if we are to have a chance, we really have to go beyond our limits," Hitzfeld told AFP.

"They are very flexible and can switch very quickly, they work like a machine. We'll have to be aggressive on attack, counter-attack quickly and then we'll have a chance."

"It will be an interesting match for connoisseurs of football and I hope we come out of it with the right result," said Hitzfeld.