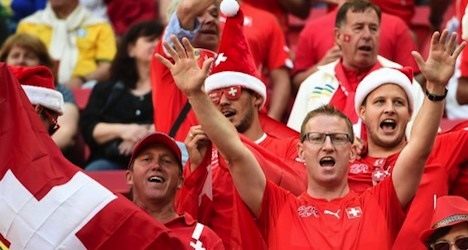 The situation is eerily similar to four years ago, when the Swiss were in contention for the last 16 but missed out when they drew their last group game with the Central American minnows.

This time around, having scaled the FIFA rankings to a dizzying sixth place, expectations are high for Ottmar Hitzfeld's respected side.

But confidence was hit in last week's 5-2 rout by France.

Midfielder Blerim Dzemaili said Switzerland would be taking nothing for granted when they face the Central Americans in steamy Manaus.

"Everyone can nurture big dreams, but first we have to do a little homework and that is to beat Honduras," said the 28-year-old.

"We have seen that the big teams just relying on individuals are quickly eliminated, which little Switzerland can't afford.

"We have to give our all together, like we did against France, but we also had some bad luck after they scored their early goals."

Switzerland needed a late winner to beat Ecuador 2-1 in their first game, and then they were swamped by France before responding with two goals of their own in the final minutes.

If France beat Ecuador, Switzerland need only a point from Honduras to qualify.

But if Ecuador win, Switzerland must better their rivals result to advance.

Honduras, who have not made it out of the group stage in two previous attempts, still have a slim chance of qualifying despite their 3-0 and 2-1 defeats to France and Ecuador respectively.

Los Catrachos will need an avalanche of goals against the Swiss, and hope that France beat Ecuador in Group E's other final game, to make it to the knock-outs.

But they have been buoyed by lifting their goal "curse" courtesy of striker Carlos Costly — who wasn't even born when Honduras last scored at a World Cup.

Their previous goal was in 1982, when Costly's father Allan represented Honduras and Eduardo Laing netted in a 1-1 draw with Northern Ireland.

"I was so happy when I scored that goal, because 32 years is a long time and a difficult barrier to overcome," Costly, 31, told the FIFA website.

"That myth, that curse which has been hanging over us for so long, has been laid to rest now."