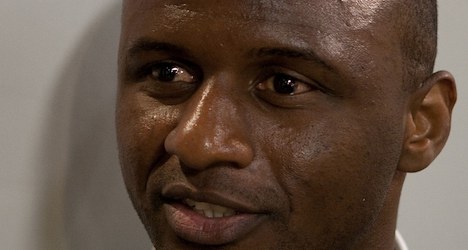 The Swiss government's weekly list of official administrative announcements showed that the country's tax administration had received a request for assistance from France.

The document did not specify whether the former France international, who now works on the management side at English club Manchester City, had done anything wrong.

Such requests can be made under a longstanding accord between Switzerland and France that fights tax fraud and ensures individuals do not pay tax on the same money to both countries.

In May, Switzerland said it was giving Paris similar bank details about former France player Claude Makelele — again without saying if any wrongdoing was involved.

Vieira has 30 days to say whether he opposes the handover, the document said.

The Swiss government list said that the information concerned an account held at banking giant UBS, but did not give further details.

Vieira, now 38, was a member of France's victorious 1998 World Cup and 2000 European championship squads, as well as the les Bleus' side who were runners up at the 2006 World Cup.

He ended his France career in 2009, after winning 107 caps for his country.

Vieira made his professional debut aged 17 with French club Cannes, before transferring to Italy's AC Milan, then heading to England in 1996 to join London club Arsenal, where he spent nine years.

He returned to Italy in 2005 to join Turin club Juventus, before heading to former side AC Milan's fierce local rivals Inter Milan.

By 2010, he was back in England, playing for Manchester City for a year, before announcing his retirement as a player and taking charge of the club's player development.