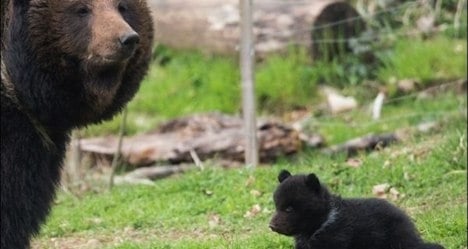 Cub 4 was one of two born at the zoo in January. Photo: Rando/Dählhölzli Zoo

The cub, known as ‘4’, was put down by the zoo after its father, Misha, killed its sibling.

The two cubs were born to the zoo’s Russian brown bears Misha and Masha in January, and the first cub was killed 11 weeks later on 2 April.

The second cub was subsequently badly bullied by its father and neglected by mother Masha, leading the zoo to make the decision to euthanize it, just five days after the death of its sibling.

At the time, the zoo said in a statement: “Putting cub 4 to sleep was a difficult decision, but unfortunately necessary. As a zoo and therefore as animal keepers we are obligated to take action when an animal must suffer unnecessarily. This was clearly the case with 4.”

Separating the cub from its parents was not a viable option, according to the zoo.

The fur will then be glued onto an artificial model of the cub’s body in a process that should be completed by the beginning of the autumn.

The cub is to be used by the zoo’s education department, which owns many other preserved skulls, skeletons and furs, in an effort to educate school groups and visitors about bears.

Speaking to The Local, zoo educator Doris Slezak said: “We want to teach children about bears and other animals and we will use the material for that. Of course with this bear people will ask questions and we will tell the story [of what happened] but it’s not the main focus.”

At the time of the cub’s death the zoo attracted much criticism for its actions from the public and animal rights group, including a legal complaint filed by a private individual.

Although Slezak is expecting some people to be upset by the zoo’s decision to preserve the dead cub, she told The Local that it’s important not to shy away from the situation.

Slezak added: “Nature can be very cruel and that’s something we want to show kids. We think that it’s right that this bear still has a function after his death, and it will help people to understand nature.”

On 16 June the cub’s father, Misha, was sterilized to prevent further breeding.