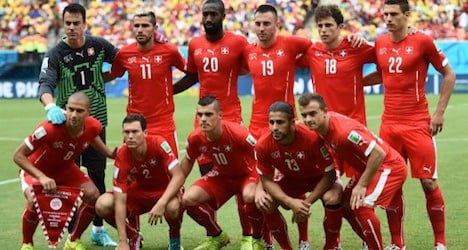 Most well-connected: Swiss starting side ahead of Honduras game. Photo: Anne-Christine Poujoulat/AFP

According to ancestry data mapped by designer James Offer, Switzerland has at least 15 players with ties to 13 other countries.

The team, known locally as the “Nati”, have six players who were born outside of Switzerland, including Xherdan Shaqiri, the hero of Wednesday’s win against Honduras that put the Swiss side into the World Cup final 16.

Shaqiri, who scored all three goals in the 3-0 victory, was born in Albania with a parent from Kosovo, according to Offer’s ancestry connections report.

The other players have foreign parents or in the case of goalie Diego Benaglio grandparents (from Italy), while Tranquillo Barnetta has Italian citizenship, according to the report.

While the Swiss football team gets lots of popular support, voters in February voted for restrictions on immigrants from the European Union amid concerns about the adverse impact foreigners are having on the country.

Non-Swiss make up almost a quarter of Switzerland’s population, although that figure includes people born in the country with foreign parents.

Offer’s study showed that of the 32 nations playing in the World Cup, each team had at least one connection to another country with the exception of Ecuador, Honduras and South Korea.

For more on the ancestry report, check here.