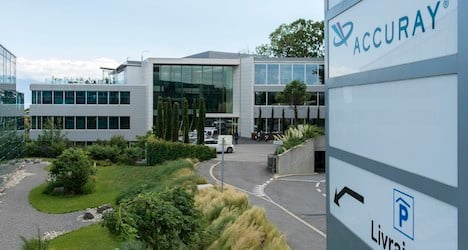 The company actually began setting up its non-American operations in the town on Lake Geneva in late 2012, it said in a news release.

Since then company said it has expanded its staff, which now totals 60, to serve markets in Europe, India, the Middle East, Africa, Asia-Pacific and Japan.

Founded in Sunnyvale, California in 1990, the company bills itself as a world leader in high-precision radiation treatment devices for oncology departments in hospitals and health clinics.

The company’s Swiss operations have grown rapidly since nine people began working in Morges in September 2012.

“We have now reached the critical mass needed to serve our current or future clients,” Hadjadjeba said.

The company, which recorded a net loss of $25.6 million in the first nine months of 2013-14, will become profitable “very soon”, the CEO said.

It provides technology covering the full range of needs for radiation treatment, the company said in its news release.

Eight of its systems have been installed in Switzerland, including at Lausanne’s university hospital (CHUV), Saint Gallen, Lugano, Fribourg, Bern, Zurich and Sion.

“A partnership has also been concluded with CHUV which will maintain its equipment at the highest technological level,” Hadjadjeba said in a statement.

The startup company counts 731 of its systems installed around the world.

Its origins date to Silicon Valley in 1987 when a professor at the Stanford University medical centre pioneered the CyberKnife, what the company describes as the first and only robotic radiosurgery system using a computer.

“Managing non-American sales teams from Switzerland allows us to gain in efficiency, which is essential to increase our commercial activities in the region,” Hadjadjeba said.