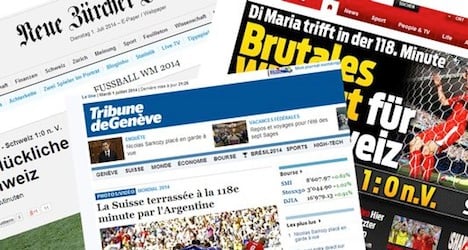 The 1-0 win by Argentina in the dying minutes of extra-time was “bitter”, “brutal”, “cruel” and “mortifying”, according to Switzerland’s newspapers.

The result knocked the “Nati” out of the World Cup, robbing the national team of its hopes of reaching the final eight — and possibly going further.

“Switzerland brought down in the 118th minute by Argentina,” read the headline in Wednesday’s Tribune de Genève newspaper, which spoke of a “deadly result”.

It was a defeat “by a thread” and the “end of a cruel story,” said La Liberté, another French-language daily.

The team coached by German Ottmar Hitzfeld appeared to be headed for a shoot-out after more than holding their own against Argentina, against whom they were billed as underdogs.

Most commentators focused on Swiss forward Blerim Dzemaili’s header in the dying moments of the game that struck the goalpost, as well as several other opportunities the ‘Nati’ had to score against Lionel Messi’s team.

“The disappointment was at the same level as the suspense that reigned throughout the match: enormous,” said Le’Express and L’Impartiel newspapers on their website.

The defeat was “bitter and brutal,” the daily said.

With his goal, Argentina scorer Angel Di Maria, after a deft pass from player of the game Messi, “stabbed our heart red and white”.

The newspaper nonetheless praised the Swiss team as “courageous” and even “heroic”.

Argentina came close to “historic shame” in the match, the newspaper observed.

Swiss tennis great Roger Federer, who is playing the Wimbledon quarterfinals on Wednesday against fellow countryman Stan Wawrinka, said on Twitter that he was “nervous” about the Swiss-Argentina game.

He posted a photo of himself with a blanket over his head while watching the match on TV.

“So rough,” he tweeted after the football game ended.

“Congrats to Argentina. Thanks for all the moments #Switzerland.”