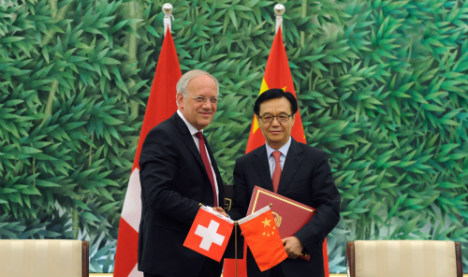 The free trade agreement (FTA), in force since Tuesday, is China's first with a mainland European country and was sealed in 2013 after two years of talks.

"We look to the huge Chinese market, but on the other side, China will find in Switzerland partners on a top technology level and a top innovation level," said Economy Minister Johann Schneider-Ammann, as he marked the start of the FTA with Chinese officials in Basel.

The deal will cut red tape and tariffs on Swiss farm and industrial exports to China, giving them access to the country's 1.4 billion increasingly wealthy consumers.

China already imports mainly Swiss machinery, pharmaceuticals, chemicals and watches, and experts expect the FTA to benefit the small- and medium-sized technology and engineering businesses that form the bedrock of Switzerland's economy.

In turn, Chinese manufacturers will get duty-free access to Switzerland, where their primary products will be cheaper for factories to use.

"Customs duty savings can provide a decisive edge compared to competitors from countries who have no agreement with China," said Swiss customs service chief Rudolf Dietrich.

Business experts say the deal could pave the way to making Switzerland a centre for Chinese companies in Europe as they increase their international investments.

The accord also bolsters intellectual property protection for Swiss goods — a persistent concern for Western firms in China.

"The FTA is also a positive message for global trade because China proves its commitment to open its markets." The deal is China's second European FTA since it signed one in April 2013 with Iceland. Like Switzerland, Iceland is not a member of the 28-nation EU.

Politicians say the Swiss agreement could also offer a model for a future accord between Brussels and Beijing.

"The experience that they have with us over coming years will probably be a step towards an extension to the European Union," said Schneider-Ammann.

EU divisions are rife, however, between the likes of Britain, a key supporter, and players such as France and Italy, which are wary of a flood of Chinese imports.

Brussels and Beijing have also been locked in tit-for-tat disputes over tariffs, Chinese rules favouring state-run companies and intellectual property.

During a visit to Brussels last month, Chinese President Xi Jinping won a pledge from the EU to consider an FTA, provided that they can wrap up a narrower investment deal first.

"One of the most important issues is political will on both sides to enhance bilateral relations," Chinese trade envoy Yu Jianhua told reporters in Basel.

That dwarfs the $9.9 billion of exports Switzerland sent to China last year, and the $12.8 billion of goods it bought in return. "The small country is looking for a big market. But the big market, China, we are looking for the quality of the economy," said Yu.

"Small is beautiful," he quipped at the FTA ceremony in Basel.

With the strong Swiss franc and high labour costs making it hard to beat rivals on price, Switzerland's firms have long made quality their selling point.

China's growing pool of increasingly wealthy and brand-aware consumers is a major draw.

For Jean-Daniel Pasche, president of the Federation of the Swiss Watch Industry, the deal "provides a framework for our economic relations with China".

"The opportunities are huge," said Peter Daetwyler, head of Daetwyler Management, which employs 550 people worldwide in the printing machine sector and currently does about a fifth of its business in China.

"The US and the Europeans don't have an agreement with China. Switzerland has one, so that's a milestone," he told AFP.

Jean-Guy Carrier of the International Chamber of Commerce said the agreement could also help draw more Chinese investment into Switzerland.

"There is going to be much more investment by Chinese companies over the next few years, making acquisitions and investing in existing businesses elsewhere," he said