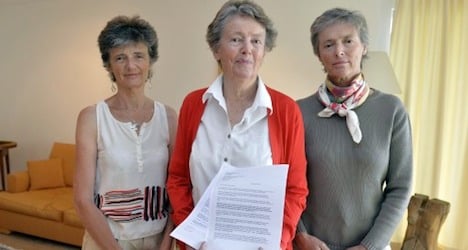 For nearly 70 years, she and other family members of Swedish Holocaust hero Raoul Wallenberg have been struggling to find out what happened to him after he disappeared in Soviet custody in January 1945.

This week, Von Dardel will travel from her home in Switzerland to Washington to attend a ceremony on Wednesday attributing a Congressional Gold Medal — one of the nation's highest civilian awards — to the brother-in-law she met just once but whose disappearance has dominated most of her life.

"We are very sad that my uncle will not be among us," said Marie Dupuy, her 61-year-old daughter who will also be attending the ceremony with her sister Louise Von Dardel, 63.

The award is the latest of a string of honours bestowed on Wallenberg, and the three hope it might help put more pressure on Russia to open archives they believe hold the key to solving the mystery once and for all.

They have gathered at Louise's home in Pully, overlooking Lake Geneva, to look through letters and emails sent to Russian President Vladimir Putin and other officials over the past year pleading for access.

"It is in your hands to end our family's ordeal that has now spanned seven decades," Matilda wrote in one letter to Putin in January.

The pile of papers represents only a fraction of the letters Wallenberg's family has sent over the years to leaders in Moscow, as well as to Stockholm, Washington and other capitals, in their bid to find the truth.

Louise recalls how as a student in Stockholm in the 1970s, she would often find her grandmother, Maj Wising, sitting on the sofa crying in disappointment over the lack of response to yet another one of her enquires about her son.

Wallenberg, a young architect and businessman, volunteered to travel to Hungary in 1944 as a diplomat to help a US effort to rescue Jews who were being exterminated there on an industrial scale.

He saved tens of thousands by issuing them protective passports in the final months of the Holocaust.

Wallenberg's family has never received an explanation for why he was arrested by Soviet forces shortly after they liberated Hungary from the Nazis, nor what happened to him after his arrest.

Soviet and later Russian officials have claimed Wallenberg died of heart failure in Soviet custody on July 17, 1947, at the age of 34, but have never produced conclusive proof.

"As we have never had any official act of his death, we have continued our search to try to bring him home," said Louise.

'Spent everything on this'

Wallenberg's half-brother Guy Von Dardel, a physicist who married Matilda in 1949 and who died five years ago, did gain access to the Vladimir prison archive in Moscow in the early 90s.

His findings there, and subsequent documents made available, albeit heavily censored and incomplete, have led researchers to believe Wallenberg was still alive and interrogated at the Lubyanka prison in Moscow six days after his supposed death.

"We know the documents are there," said Louise, insisting that with proper access to the archives, researchers could solve the mystery within a year.

Yet there is another obstacle: money.

For seven decades the family has been bankrolling the search on their own, covering everything from travel costs, to towering phone bills to researcher salaries.

"We've spent everything on this," Matilda said.

Beyond exasperation with Moscow, they also lament what they say is the lack of support from countries that have repeatedly hailed Wallenberg as a hero.

Louise lashed out at Sweden for barely reacting after the seizure of one of its diplomats —  an "an act of war", she said.

Stockholm apologized for its lack of action in 2001.

While Sweden today is eager to honour Wallenberg's memory, the foreign ministry, which must process all official requests to Russian authorities, often takes months to respond to the family's queries, if at all.

Dupuy also recalls a visit years ago to Israel, which has given Wallenberg the prestigious Righteous Among the Nations honour bestowed on non-Jews who risked their lives for Jews during the Holocaust.

"The red carpet was unrolled, and when we left, they rolled the carpet back, and then nothing, " she said.

US President Barack Obama , whose country made Wallenberg an honorary citizen in 1981, promised the Holocaust hero's half-sister Nina Lagergren last September he would raise the issue with Putin later that month.

The family is still waiting to hear if he kept that promise.

He's being honoured, but at the same time not cared about."

It was difficult, she said, to understand why the world had not done more, maintaining it was no longer just a family matter.

"We're not asking for the moon," she said.

"We're asking humanity to stand up for a man who stood up for humanity."