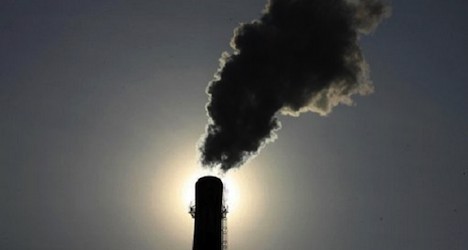 The department issued statistics showing that CO2 emissions linked to burning fuel increased by 5.4 percent in 2013 from the previous year, largely due to colder than normal weather, which drove heating fuel use upward.

Corrected for the impact of the weather, the emissions dropped by 1.7 percent but the rate remains above goals set by the government.

Its targets call for an increase in the current carbon tax of 60 francs per tonne of CO2 emissions to 72 francs in 2016 if the emissions this year do not fall to 76 percent of 1990 levels, corrected for climatic conditions.

The tax will jump to 84 francs if the emissions only fall to 78 percent of the baseline year.

The environment department calculated the emissions last year at 80.7 percent of 1990 levels, corrected for the impact of weather.

Without the adjustment for climate, emissions last year were 12.4 percent higher than in 1990.

The carbon tax, levied since 2008 on oil, gas and coal, generates about 600 million francs a year.

About a third of this funds a program to encourage more energy-efficient buildings, the government says.

The tax does not apply to petrol and diesel for motor vehicles.

Companies can be exempted from the CO2 tax if they participate in emissions trading to commit to cutting emissions.

Although traffic has increased, CO2 emissions from motor vehicles have stabilized since 2008, declining 0.4 percent in 2012 from the previous year, the environment office said.

It attributed this to more efficient cars but said this improvement must intensify in the coming years if targets are to be met.

The targets were set under Switzerland’s revised CO2 Act passed as part of the country’s commitment to the Kyoto Protocol on measures to combat climate change.