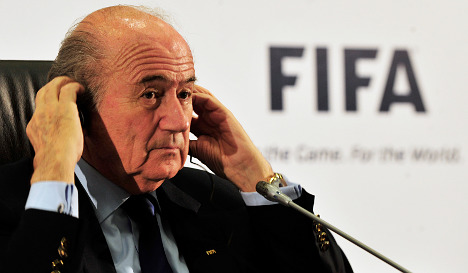 "I am very much concerned with this situation in the region," Blatter said.

"We are heartbroken to learn that people from the football community have been killed," he said.

"Fifa and I personally deplore this situation and any form of violence," Blatter said.

"We are united in hoping for peace in this region and across the world," the global game's chief added.

PFA president Jibril Rajub met Blatter at Fifa's headquarters in Zurich on the sidelines of a visit to Switzerland to attend a session of the International Olympic Committee.

"I appreciate the commitment of the Fifa president to develop and invest in football in Palestine, despite the difficulties we face," Rajub said in a statement.

"We believe football should remain a tool to build bridges between people," he said.

"I am very saddened by the loss of Palestinian life in the current conflict but I am still optimistic that peace will prevail."

He said his dream was to see the Palestinians achieve an "independent, sovereign state alongside our neighbours, including the State of Israel, according to international legitimacy."

The goal of the football-themed peace process was to try to end sharply political disputes over Israeli entry restrictions, such as that on players from Arab nations which led to the delay of an international youth tournament hosted by the Palestinians in 2013.

The Palestinians also have repeatedly charged that Israeli policies make it hard for players, coaches, referees, officials and equipment to get in and out, smothering the game's development in the West Bank and Gaza Strip.

Israel meanwhile points to the abuse of football facilities by Palestinian militants to fire rockets at its cities and warns that sport has been used as a tool to disseminate anti-Israeli propaganda.

Under the deal, the two associations named liaison officers to try to stem disputes.

While the Palestinians lack broad international recognition for their would-be state, their football association joined Fifa in 1998.

Israel joined in 1929 when it was still under British control, 19 years before independence.

Most Middle East nations are members of the Asian Football Confederation.

But politics have made Israel's road rocky in the international game — they played in Asia until 1974, then Oceania, before joining Uefa in 1991.