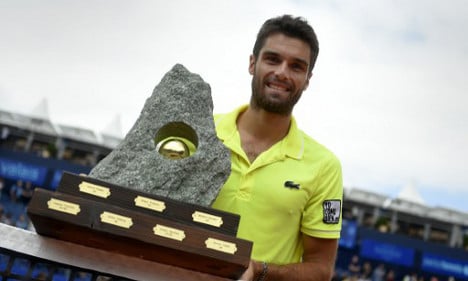 The 71st-ranked Andujar, who won on the village court where the clay stands 1,050 meters above sea level, has two trophies from  Casablanca, earned in 2011 and 2012.

"I'm very happy, it was a very tough match, I knew it would be a fight physically," said the winner after the 92 minute final. "The first set was basically played in two points.

"I won those points and that was the set. He got an advantage in the second set, but finally I made it. I played great on the last few points.

"After working a lot, it all pays off when you get to hold the trophy. It's amazing."

Andujar continued a Spanish tradition in Gstaad at an event won a dozen times by Iberians since 1990. He is the 11th Spaniard this season to win on the ATP Ten from 42 tournaments so far,

Andujar fired his only ace on match point and fell onto his back in joy at taking the third trophy of his career. It was his first match against Monaco.

"I looked up and saw my parents, my girlfriend, my brother in the stands. It was a feeling that I cannot describe.

"I was going for an ace but I was aiming out wide, instead it hit the line perfectly. It was a lot of work to get this trophy but I'm feeling very comfortable with my game."

Andujar won the opening set in 43 minutes with a break for 5-3. World number 105 Monaco put a forehand into the net a game later on Andujar's set point.

In the second set, the Argentine went up an early break for 2-0, but lost it in the seventh game on an Andujar return winner.

The pair then traded breaks in three of the next four games before the Spaniard sealed victory.

"I've been returning well all week that that helped me," said Andujar.