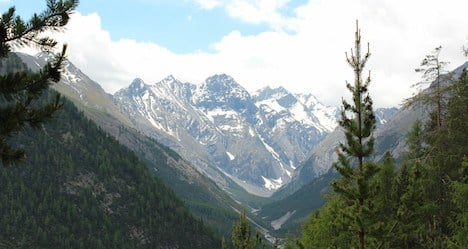 Four fallen tree trunks block the path ahead of us. Shielding an amphitheatre of imposing grey summits, they are an unusually untidy sight for Switzerland.

Behind me, I can hear the hum of traffic on the Ofen Pass road; ahead, the rustle of the breeze and the soft patter of rain on this drizzly summer afternoon.

I tread forward over the springy carpet of larch needles, and read a sign warning hikers to stay on the path. After some 40 minutes’ hiking uphill from Zernez in the Engadine Valley, we have finally reached the border to the Swiss National Park.

“Everything here is left to mother nature,” explains my guide Laurence Badilatti. “The fallen trees will be left here: we want to see what happens to them, for the purposes of scientific observation and research.”

These are the main principles behind Switzerland’s only national park, in the easternmost corner of Canton Graubünden. It was founded on 1st August 1914 by naturalists Carl Schröter, Steivan Brunies and cousins Paul and Fritz Sarasin to protect an area of the Alps from the onset of touristic development.

Article 1 of the current federal law governing the park states: “The Swiss National Park . . . is a reserve in which the entire flora and fauna are protected from any human interference and are left to their natural development.”

The effect is charming. As we continue our three-hour route along the Cluozza Valley to the Chamanna Cluozza mountain hut, the roar of the Ofen Pass dims. There is no interfering hum of ski lifts. Winding up between the larch, pine and Scots pine trees, we pass just one other person, and hear only the call of the nutcracker from high above.

“He is the ‘scout’ of the forest,” smiles Badilatti, who has been working for the National Park for six years. “As soon as he hears someone coming, he cries out to warn the other animals.”

If you want to see some of the 30 types of mammals and 100 species of birds lurking behind the scenes – including chamois, ibex, marmots and bearded vultures – you have to tread lightly.

But seeing them is more than anything a matter of luck, warns Badilatti. “Sometimes people come and expect too much,” she says. “Sometimes you see the wildlife, and sometimes you don’t. It is simply important to take your time, walk slowly, and keep your eyes and ears open.”

Badilatti is so in tune with nature that she spots things I would never have noticed: an oddly shaped pinecone that has “almost certainly been nibbled by a squirrel”, or a pine tree that tapers in at the middle and then back out – chamois have been eating it, so it thins out around the height of their muzzles.

She is alert even when we stop in a clearing in the forest for lunch, jumping up, binoculars in hand, to show us chamois grazing in a meadow at the top of a scree slope. “I just have a feeling for where they are,” she smiles.

Today they are grazing on the slopes leading up to the highest peak in the park, the 3,165-metre summit Piz Quattervals. Beyond it, creating a wall at the bottom of the valley, stands the imposing grey sweep of the ‘devil’s peak’, Piz dal Diavel. We can just make out the Val dal Diavel, an inaccessible valley, and the Val Sassa, which is framed by a rocky glacier.

Far below is the Ova da Cluozza river, rushing in a ribbon of icy turquoise down the valley. And finally, above it and tucked into a forest clearing, we can see the Chamanna Cluozza. Built in 1910, this Gingerbread house structure is the only mountain hut within the park.

Having climbed to a height of 2,100 metres for lunch, we now drop towards the hut. Badilatti points out alpenrose, which are starting to bloom and will soon paint the valley red, deceptively dainty Alpine butterwort, which catch and eat small flies, and spring gentian of such a vivid blue they look almost artificial.

“The best months to visit if you want to see the flowers in full bloom are June and July,” advises Badilatti, “The park is beautiful all year round, though it is not open to the public in the winter.”

The cloud is breaking as we cross the river, and by the time we reach Chamanna Cluozza’s patio ten minutes later, the sun is shining on heart-shaped stones and little pots of colourful flowers. It is a deceptively cosy scene: the hut is basic, with no hot water and a small washroom without showers.

“I recommend the Hotel Parc Naziunal at Il Fuorn to anyone who doesn’t fancy much of a walk, or wants more home comforts overnight,” smiles Badilatti. For an easier walk, she recommends the Swiss Family Trail at Champlönch, which is six kilometres long and includes a virtual mountain guide.

Warm welcome in the wilderness

No sooner have we ordered cups of tea and slices of homemade Linzer cake than a voice calls “Welcome!” Jürg Martig, who runs Chamanna Cluozza with his wife Marlies, dashes out, looking surprisingly sprightly: there is no road to the hut, and he had to hike to Zernez this morning and carry back 30 kilograms of bread!

He is carrying a telescope, and after pointing it towards the woodland opposite, urges us to take a look. I peer into it, and come face to face with a red deer. “She’s always there at this time of day,” smiles Martig knowingly – he’s been working here for five years.

He is also a mountain guide, and makes sure his guests head off into the mountains safely. Tomorrow, he reveals, our walk will take us up to 2,545 metres above sea level and over the Murter saddle behind the hut. “You should see marmots and chamois,” he adds.

But in the meantime, I am going to lean back, drink in the silence of the wilderness and then fall asleep in natural darkness. How much we have to thank those four naturalists for creating this corner of paradise 100 years ago – for where else in the Alps could you find such peace and quiet just three hours’ walk from civilization?

Guided hikes in the National Park take place every Tuesday and Thursday from early July to mid-August, and cost 25 francs ($28) for adults. Virtual guides for the Swiss Family Trail at Champlönch can be reserved at the National Park Centre in Zernez, which also has an interactive exhibition about the park. Make sure you go prepared with sturdy footwear and a rain jacket. Chamanna Cluozza is open until mid-October and costs from 66 francs ($73) half board. The Hotel Parc Naziunal costs from 80 francs ($88). For more information and a guide to hikes, visit www.nationalpark.ch or download the free app iWebPark.

The official anniversary party took place on August 1st in Zernez. But other celebrations – such as the open air theatre Laina Viva, which tells the story of the founding of the park – are taking place throughout the summer. Find out more at www.nationalpark.ch/jubiläum