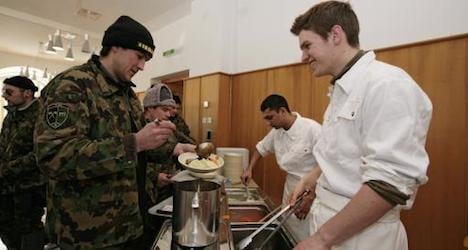 The Swiss animal protection association (STS) complained that the army was serving meat coming from countries that fail to respect Swiss standards for raising animals.

The army decided to change its policy after articles appeared in the Swiss media about proposed use of Hungarian rabbit meat, as a cost-saving measure, the SDA news agency reported on Monday.

The department of defence has set a daily budget of 8 francs and 50 cents ($9) for feeding each soldier in the largely conscript force, SDA said.

“All the food served will come exclusively from Swiss breeders and producers,” Reist is quoted as saying.

The army will serve fish products that are certified for being “respectful to the dignity of animals”.

The cost of the change in policy will add around 1.5 million francs to the army’s current annual budget of 63 million for feeding the troops, SDA said.