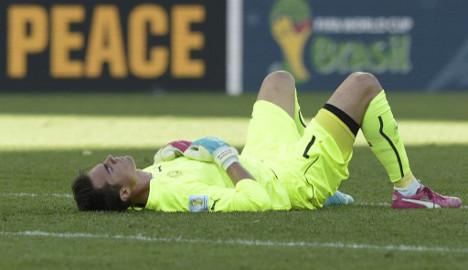 "Firstly, at the age of 31, I'm no longer the youngest player and I want to put more focus on my club, and secondly, I want to spend more time with my family," Benaglio said in a statement issued by the Swiss Football Association.

Benaglio has won 61 caps since making his debut in 2006, and rapidly earned his berth as first-choice keeper after the 2008 retirement of Pascal Zuberbuehler.

"I'm in good shape, but once you're over 30, you need just a little bit more time to recover than you used to," said Benaglio, who played at the World Cup in Brazil this summer.

"This hasn't been an easy decision for me. The Swiss team has developed in fine fashion, and we have a great group with an excellent atmosphere," said Benaglio.

"But that's also the reason that I don't feel that I'm abandoning the team. Switzerland has a rising generation of quality 'keepers, especially when you look at Swiss goalies in the Bundesliga," he added.

Among Switzerland's other goalkeepers who ply their trade at German clubs are Augsburg's Marwin Hitz, Freiburg's Roman Buerki, and Yann Sommer of Moenchengladbach.

The Swiss have spent the past decade and a half working on a youth development strategy that has won them plaudits and paid dividends.

They have put on solid displays on the international stage, most recently at the World Cup, where they reached their target of the round of 16, only exiting due to an extra-time goal by Argentina.

They are now eyeing a slot at Euro 2016 in France, and take on England at home in the qualifiers on September 8th.

Switzerland's new manager Vladimir Petkovic, who took the helm after veteran Ottmar Hitzfeld bowed out after the World Cup, had recently said that Benaglio remained his prime goalkeeping choice.

He said that he regretted the player's decision but understood that it had been carefully weighed up.

"Diego has enough experience to know the responsiblity he is taking for his decision. For me, it's now a matter of looking forward. Fortunately, we have other quality alternatives for the position," Petkovic said.