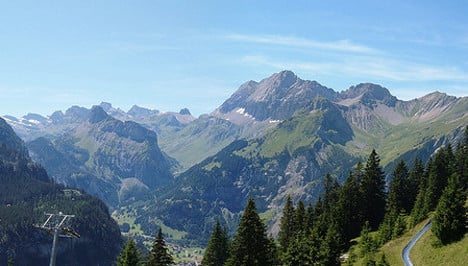 According to initial investigations, the man and a fellow hiker were making their way towards the Morgenhorn mountain in the Blüemlisalp massif near Kandersteg when the German slipped on the snow and fell.

A rescue operation was launched in the early hours of Wednesday morning but was hampered by bad visibility.

The body of the man was finally found by helicopter at the bottom of a cliff, said the police.

The second hiker, a 23-year-old man, was found unharmed and helped to safety by Swiss air rescue service Rega and members of the Swiss Alpine Club.

The accident is the latest in a string of deadly incidents in the Swiss mountains this summer.

Earlier in August another German died in the Valais after falling 400 metres over a cliff whilst hiking an alpine trail.

Also in Valais, four people died in two avalanches over one weekend in July, while a 67-year-old American died in a fall near Zermatt.

In June another hiker lost his life after falling into a ravine in the Vaud Alps near Les Diablerets.