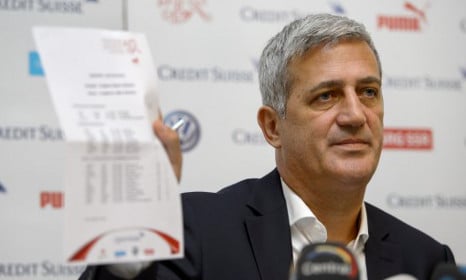 Kasami, who has just transferred to the Greek club from Londoners Fulham, had been the surprise absentee in Switzerland's World Cup roster drawn up by veteran manager Ottmar Hitzfeld.

Seen as a rising star, the 22-year-old has made two appearances for Switzerland and scored once, but has not won a cap since a friendly against South Korea last November.

Hitzfeld, in charge for six years, bowed out following a World Cup campaign that saw Switzerland reach their target of a round of 16 berth, only exiting due to an extra-time goal by Argentina.

But he also opted to bring back Basel midfielder Fabian Frei, who has not worn the Switzerland shirt since a February 2012 friendly defeat by Argentina.

And he also decided to call up two untried defenders, Silvan Widmer of Italian club Udinese, and Loris Benito, who plays in Portugal for Benfica.

Petkovic also shook up his list of goalkeepers, as stalwart Diego Benaglio last week announced his international retirement after 61 appearances in order to concentrate on his club career with German side Wolfsburg.

His number one choice is now set to be Yann Sommer, who has six Switzerland caps and plays for Germany's Moenchengladbach.

Sommer's two competitors for the keeper's jersey likewise play in Germany: Freiburg's Roman Buerki, who has been called up but never capped, and neophyte Marwin Hitz, of Augsburg.