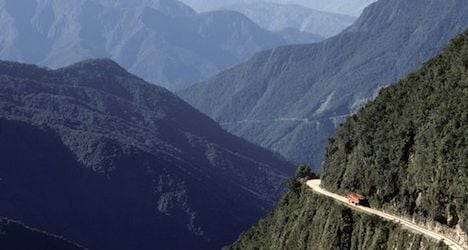 Route in the Uyuni region of Bolivia. Photo: Hermes Images/AFP

The accident occurred on Saturday at around 8.30am local time (3.30pm in Switzerland) in the Challapat region near La Paz, the ATS news agency reported on Sunday.

The Swiss department of foreign affairs confirmed that three Swiss were among the victims of the crash.

The Bolivian newspaper El Dia reported online that the bus was carrying 35 passengers — mostly tourists — from the town of Uyuni to the city of La Paz when it overturned.

Another Swiss woman whose name and age were not indicated was among the victims.

A further 24 other passengers were injured, 21 of whom were transported to a Challapat hospital while the other three were taken to health centres in the city of Oruro, El Dia said.

Swiss President Didier Burkhalter “expresses his deep sympathy to the relatives of the victims,” the federal foreign affairs department said in a statement.

The department said its representatives in La Paz were in contact with Bolivian authorities “who are competent to investigate the causes of the accident”.

El Dia, citing police sources, said excessive speed appeared to be the cause of the crash.