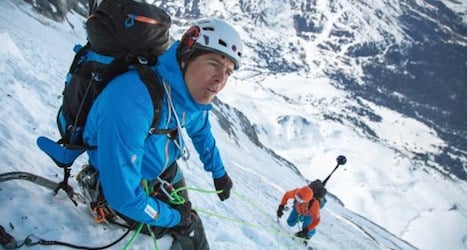 Expert mountaineers Stephan Siegrist and Daniel Arnold climbed the legendary original route up a 1,800-metre (5,905-foot) wall, first conquered in 1938, over a two-day period in April.

For Project 360, backed by Swiss mountaineering and trekking equipment company Mammut, the two carried specially-made cube-shaped cameras made from six cameras stuck together, shooting still frames and video every 30 seconds.

One more climber, Denis Burdet, also followed with his own 360-degree camera, while two more climbers were carrying regular camera and video equipment.

A drone shot aerial footage from above.

Digitally stitched together, the images offer unprecedented panoramic views of the jagged face, which computer users can navigate in the same way as Google Street View (http://project360.mammut.ch).

“You really get the feeling you're climbing the North Face,” Siegrist told AFP in an interview, adding that he had been “deeply impressed and surprised by how real (the footage) looks.”

He said he at first had been concerned that the camera, which “looked a bit like they were made by Bob the Builder” and was mounted on a rod sticking out of his backpack, would throw him off balance.

But the pack, which together weighed about eight kilos (17 pounds), turned out to be fairly comfortable and the climb “was actually quite easy,” he said.

The 42-year-old professional climber, who has scaled Eiger's daunting north face 30 times over his more than 15-year-career, said he at first had been sceptical about the project.

He feared it might entice tablet-bearing novices to try to scale the face, nicknamed “Mordwand” or “Murder Wall” for the multitude of climbers who have lost their lives there.

But his mind was put at ease when the team decided to only show the “hot spots” along the way and not the entire route, he said.

Siegrist and Arnold have also pulled off a similar climb with 360 cameras on the famous Hornli Ridge on the Matterhorn, on the Swiss border with Italy.

The images from that mountain, whose pyramidal 4,478-metre (14,692-foot) peak is considered a national symbol in the Alpine country, are set to be released by Project 360 in October.

Mammut is also using other teams to map 360 views of other Alpine peaks, and Siegrist said he expected it would not be long before more easily accessible routes could also be explored virtually.

The climber acknowledged he was ambivalent about the inspirational pull the projects would likely have in converting more people to mountaineering and climbing.

While good for the industry that provides his livelihood, Siegrist said “it's a dilemma”.

“I really only want to be alone in the mountains.”