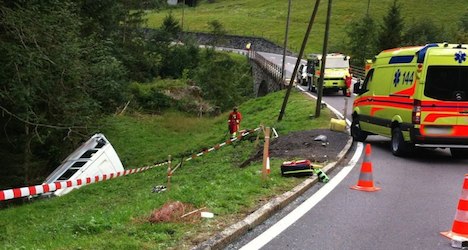 The accident occurred on Saturday around 4.30pm on the Sustenstrasse, about 20 kilometres east of Interlaken, where traffic was held up because of a farm tractor, police said in a statement.

For reasons not immediately known, the minibus, carrying men aged 46 to 81, moved out into the opposite lane to overtake vehicles when its crashed with an ongoing car and flipped over the embankment, the statement said.

The car came to a halt but was considerably damaged while a one-year-old infant in the vehicle was slightly injured.

The driver and other occupants of the car were uninjured, according to the police statement.

All the passengers in the minibus were injured, including a 64-year-old man with serious head injuries, the statement said.

After being hit by the minibus the car struck a motorbike but the two-wheeling driver was unharmed, police said.

The Sustenstrasse was closed for several hours following the crash.

Cantonal police have launched an investigation into the cause of the accident.