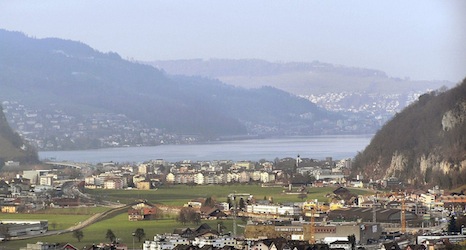 View of Stansstad with Lake Lucerne in the background. Photo: Tilman-AB/Wikimedia Commons

Officers were contacted on Sunday and a marine patrol discovered the woman’s lifeless body in the lake, near Stansstad, cantonal police said.

Experts from the Zurich institute of legal medicine (IRMZ) identified the body and concluded that injuries received by the woman were consistent with homicide, police said.

Police have not disclosed the identity of the woman or where she was from.

The department said it would not be giving out further information while the investigation remains under way.

But police said that anyone with information about the case should phone 041 618 44 66 or contact the nearest police department.

Meanwhile, police in the canton of Vaud are investigating another death after a body was found floating in the Thièle River in the town of Yverdon-las-Bains on Monday afternoon.

Police did not release any information about the victim.